A spontaneous exhibition for PhotoHastings 2015 in response to an unexpected gap in the Observer Building’s gallery schedule following A Sense of Place curated by Grace Lau and Andrew Moran.

On Saturday 28 November at 6pm there were artists’ talks followed by a drinks reception and a live DJ. 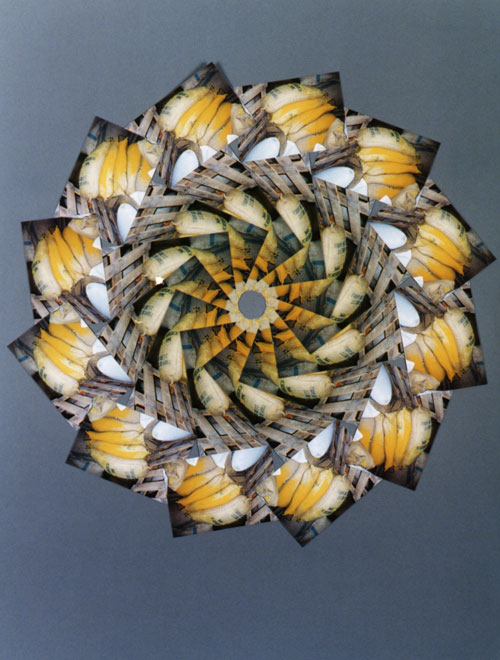 Spice, Paper Sacks and Pallets
w 93 cm x h 123 cm
multiples of one photograph mounted on board framed under glass

Karin speaking about her work

Karin, for the first time, exhibited two of her works at the Photo Hub exhibition A Sense of Place, held at the Observer Building Gallery, Hastings, between 28 October and
14 November 2015.  She is pleased to have been selected for this show.  The exhibition has been reviewed by the Hastings Online Times.

(Both works have been previously exhibited in London as part of the MEME exhibition.)

Karin’s works explore that which is in the photo and that which is not e.g. small islands in the river at low tide are re-created through the shape of the image but so is the flow of the river from where it is rural, gentle and beautiful to where, in Urban River II, the Thames becomes angular, is dissected by bridges and hemmed in by walls and wharves while litter bobs around.  In this work a red canister moves through the image  on its way to the sea. 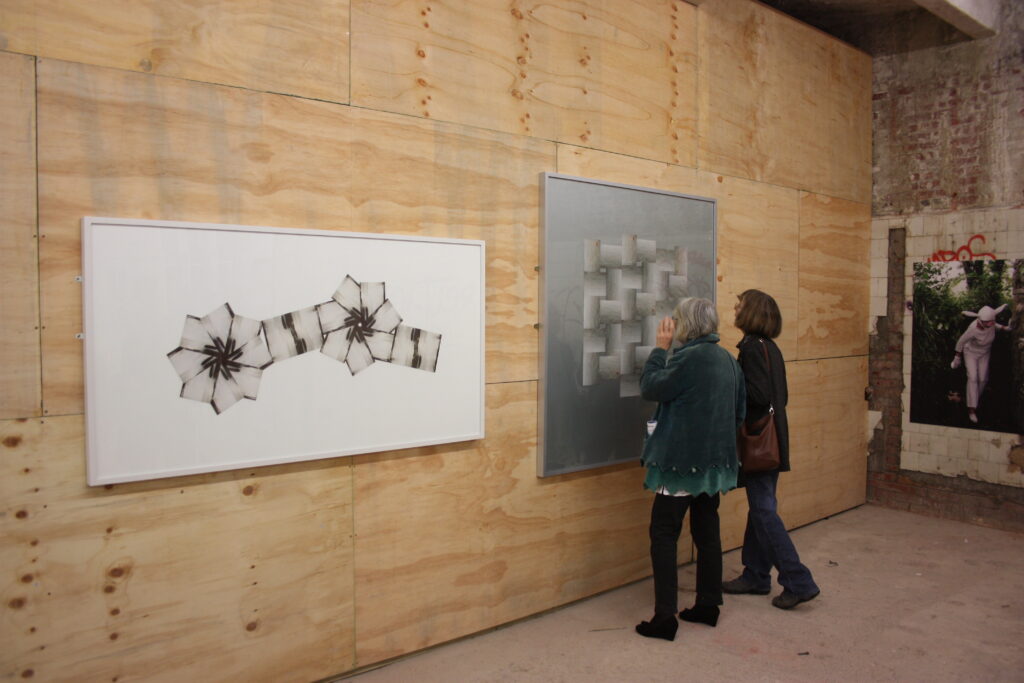 Thames at Low Tide
Multiples of one photograph on sprayed MDF board, framed under glass
w 180 cm x h 097 cm

The Observer Building is a temporary art space and the gallery part of it is vast. Inside and outside the building, graffiti artists have left their mark and it will be interesting to see how well the curated exhibition will sit with random and spontaneous mark-making. For Karin this is a new experience and she is curious as to how it will work out.

Karin has taken some snapshots of the site and building. 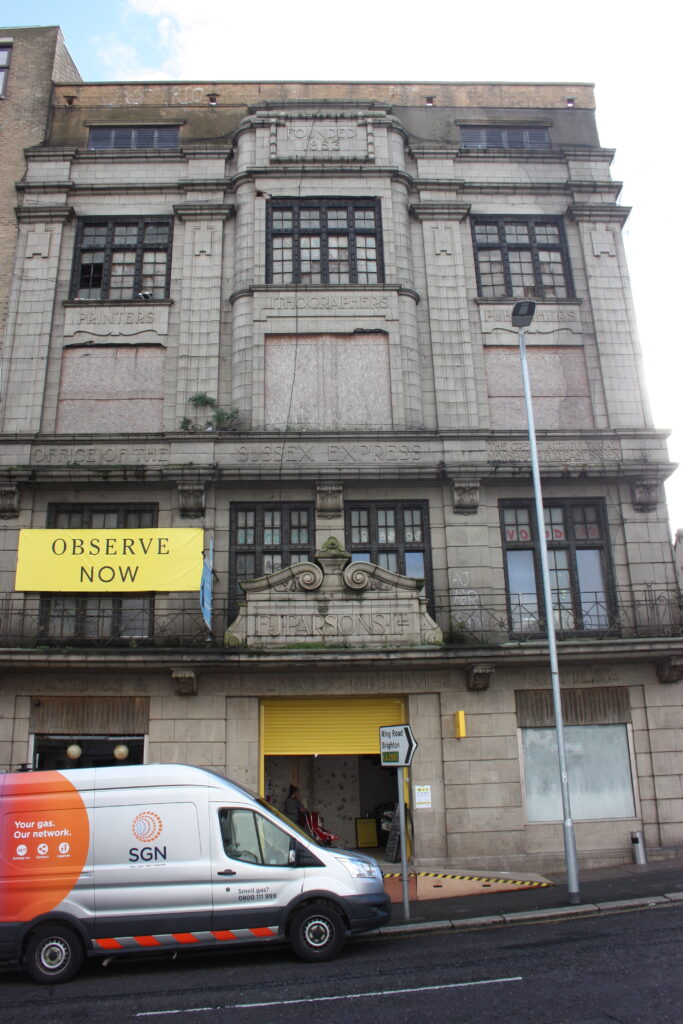 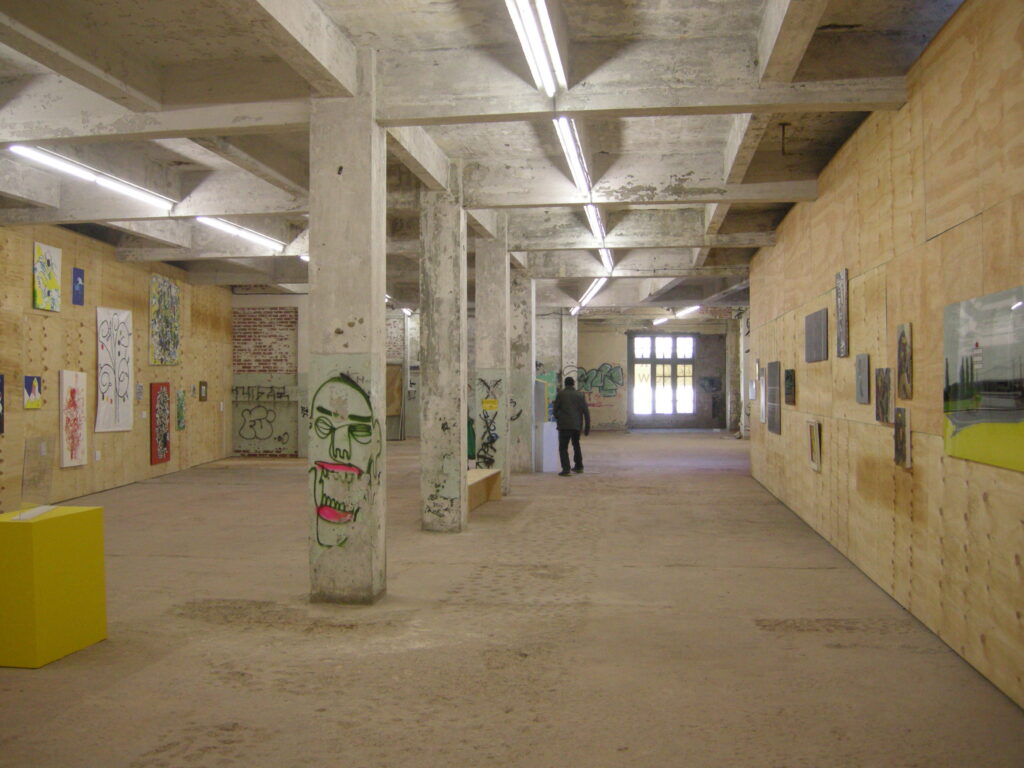 The gallery space on the first floor at a previous exhibition 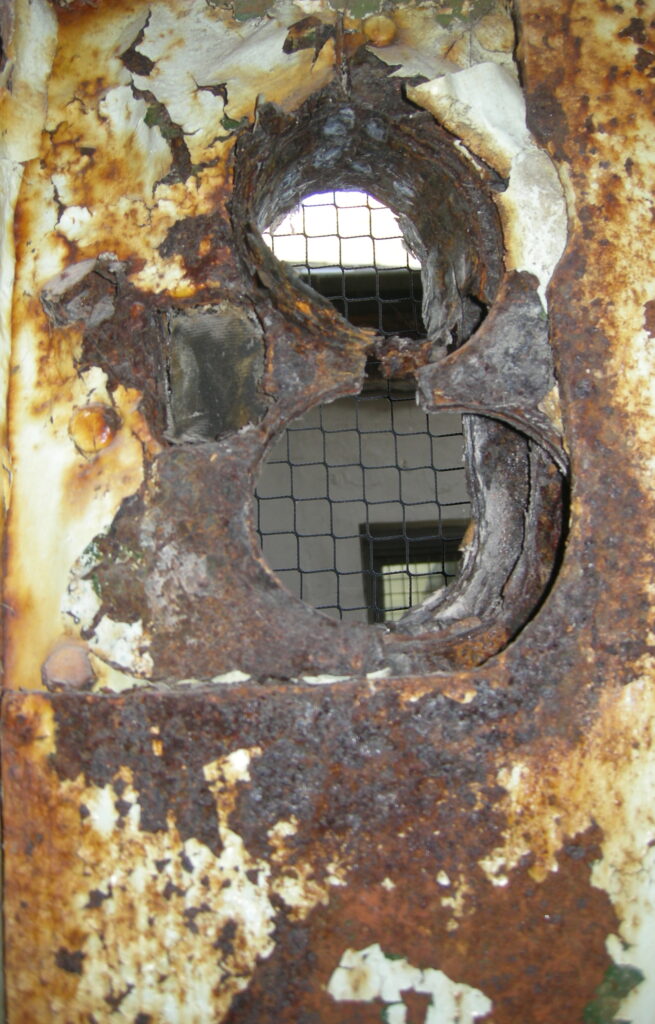 A door on that floor 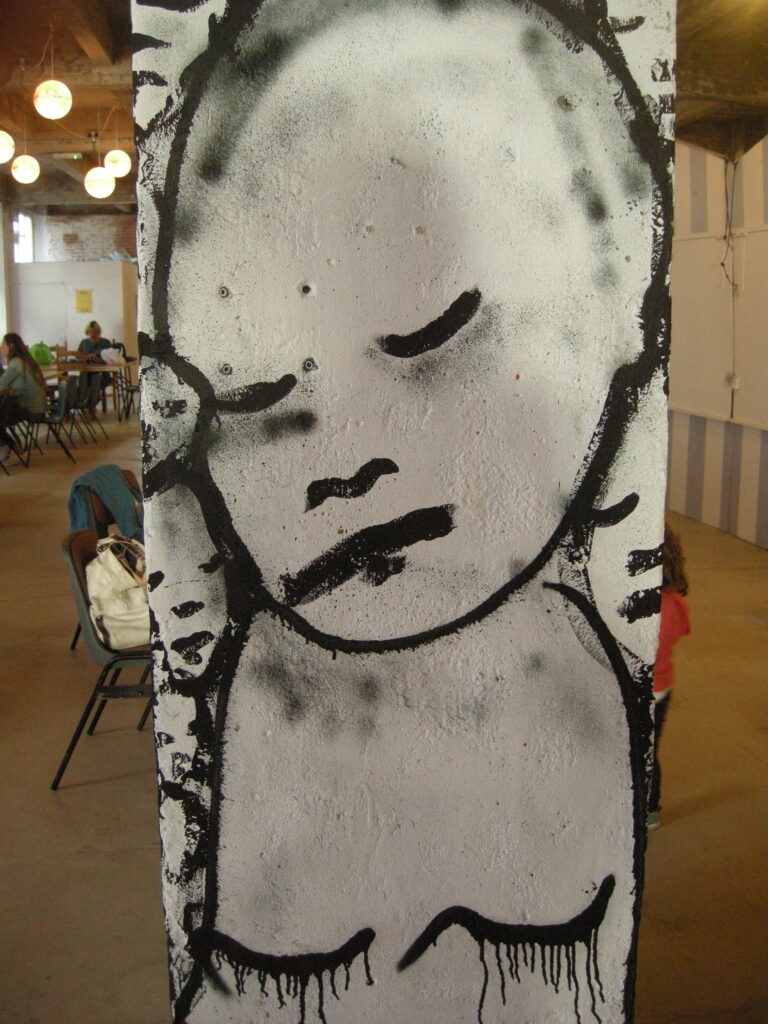 A pillar on the ground floor 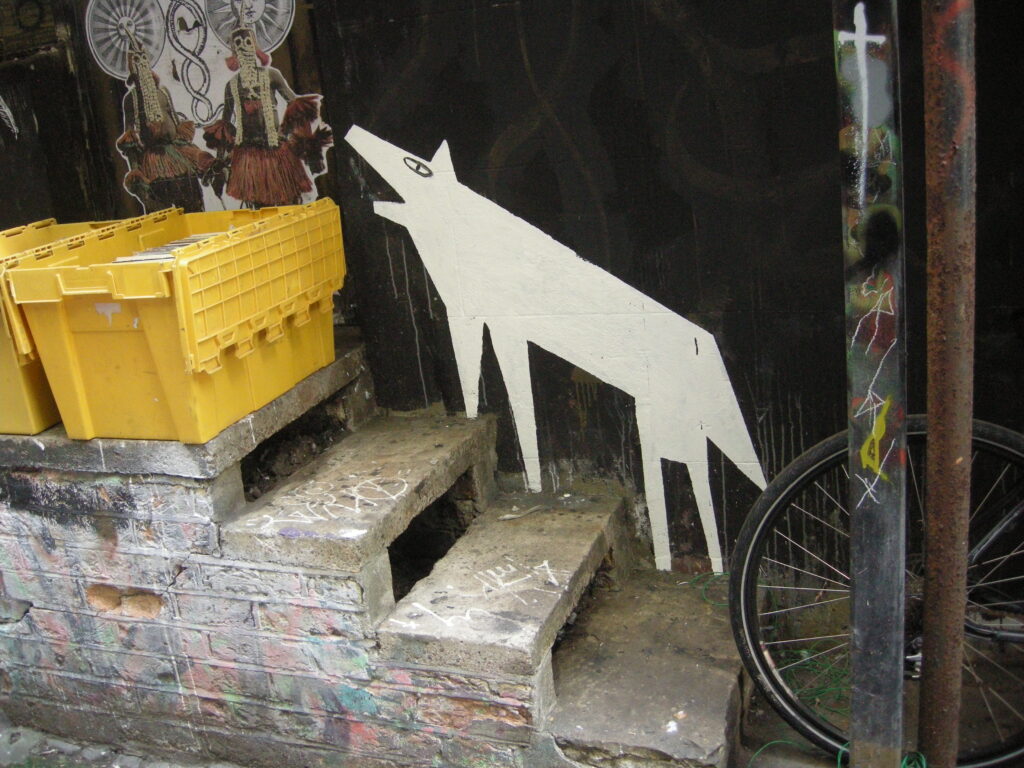 The alley at the back of the building

Karin exhibited her work Reservoir at the Bermondsey Artists’ Group Pool Exhibition at the Cafe Gallery in Southwark Park, London, between 4 July 2015 and 26 July 2015.

The work references the transformation of the many docks into new urban spaces and  maps the lost history on the south side of the Lower Pool of London: King Edward III’s manor house had as yet not been excavated and lay buried beneath a fenced-off patch of grass; the sky was as yet not reigned in by high-rise buildings and reigned supreme above derelict docks and forgotten pockets of land, reservoirs of wild life and flowers. 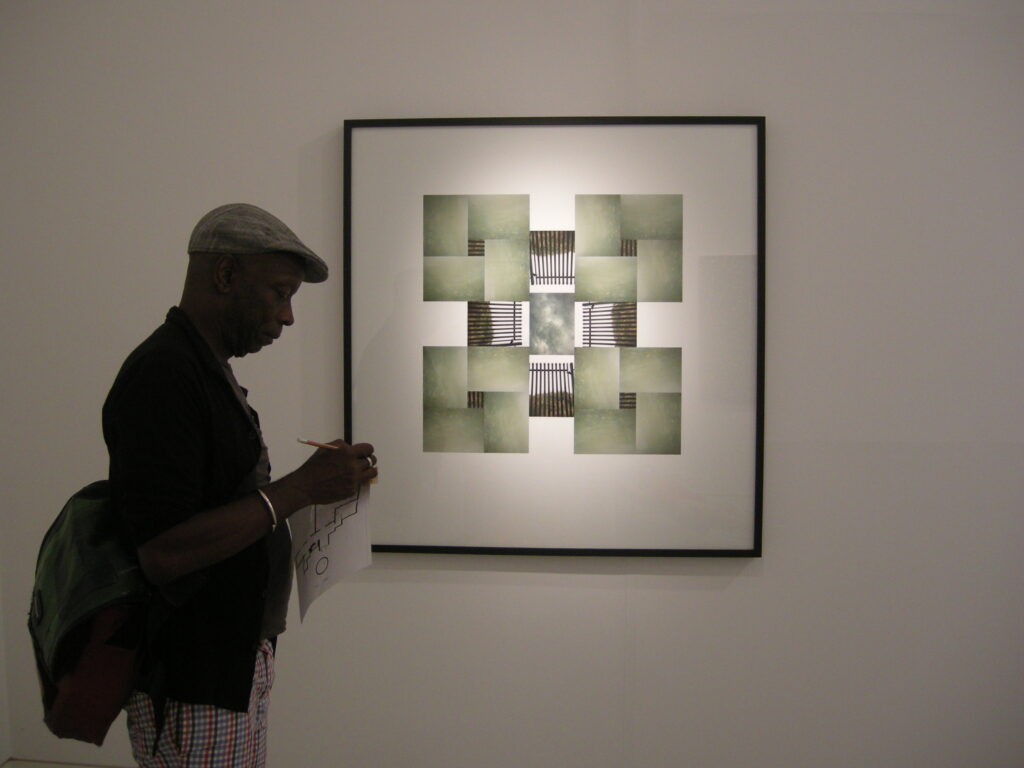 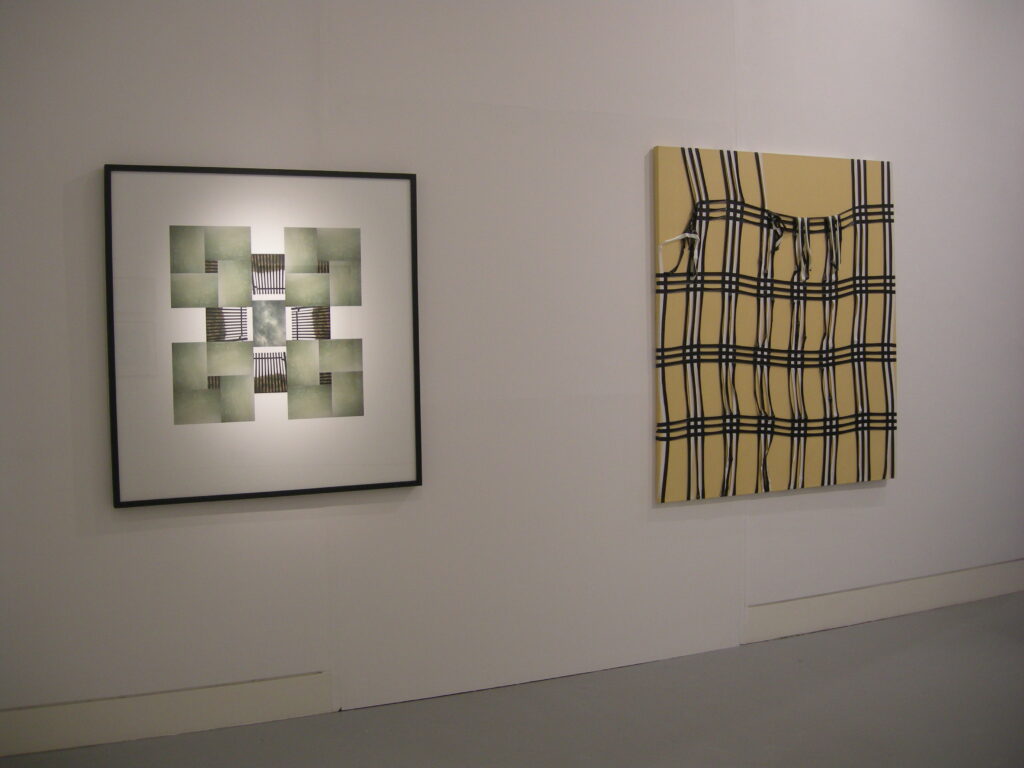 Karin exhibited her work In the Eye of the Beholder in the South London Women Artists exhibition What Is Urban? at the Brixton East Gallery from 26 February to 11 March 2015.

IN THE EYE OF THE BEHOLDER

An open space by the Thames was landscaped with a retaining wall of sawn-off tree trunks running alongside a street that led to the river. The tree trunks had been vandalized: they had been burnt – hence the dark charcoal-black look. Here are the urban opposites: creativity to enhance the urban environment and actions to deface and destroy and yet through the later daubing of blue paint creating, by default, something oddly beautiful. I have tried to capture this process as well as referencing the proximity to the Thames. 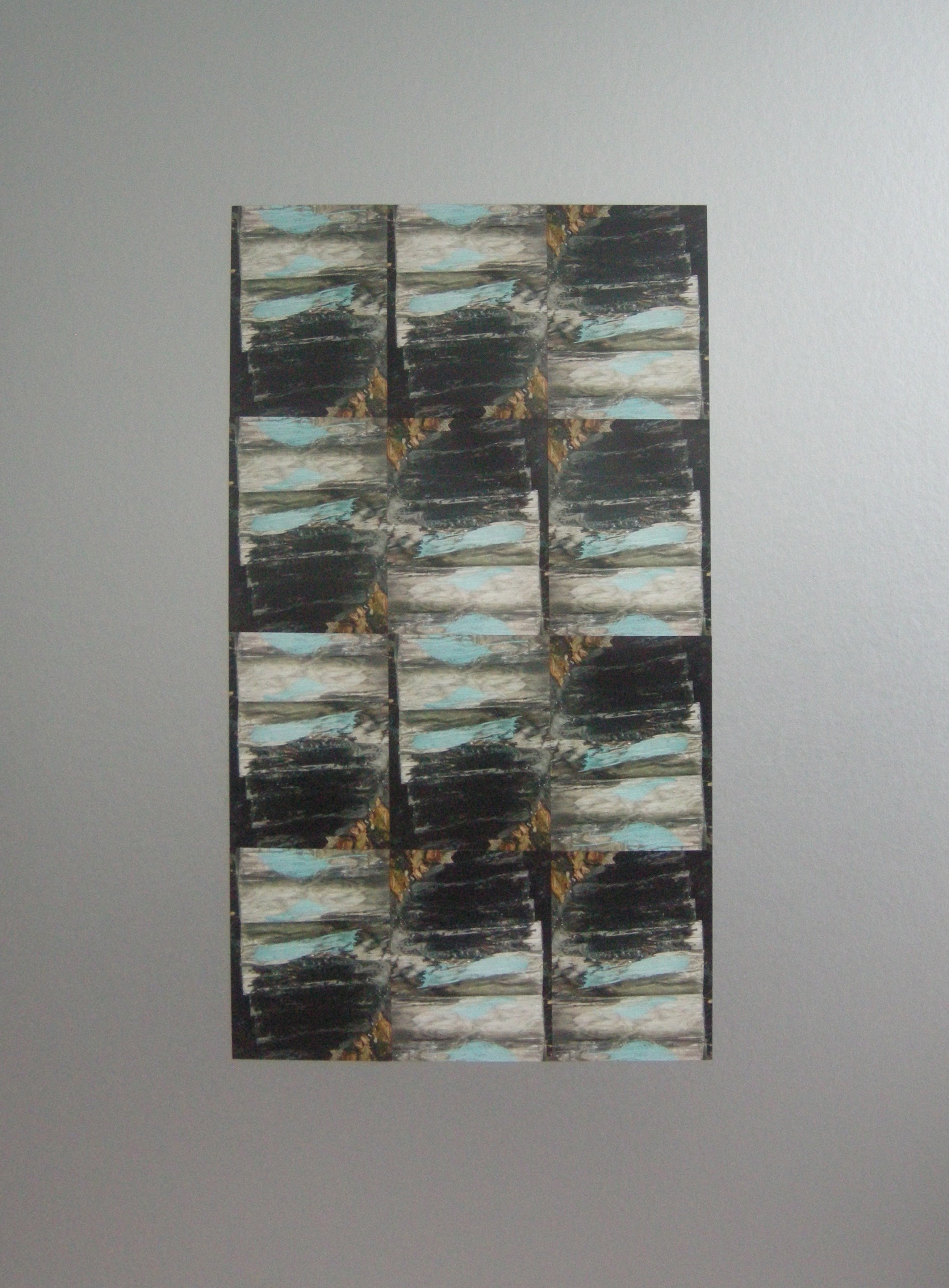 Karin exhibited at the Hastings Arts Forum Members’ Exhibition from 27 January to 8 February 2015. She showed one work that belongs to the Mill Cycle exhibited in solo exhibitions in London and the Bristol Watershed.

Close to Tower Bridge a Victorian industrial building housed the last working spice mill in London. Its alluring smells wafted down the narrow streets of Butlers Wharf. Inside the building, spice covered machinery, sacks and drums alike. In an immense semi-lit warehouse towering stacks of bales had escaped the drifting spice. But the light shimmering on the protective plastic sheets was as beautiful as if spice had wrought its magic transformation. While still photographing the mill, P&O announced that it would be closed within 14 days. Today the building is luxury flats. 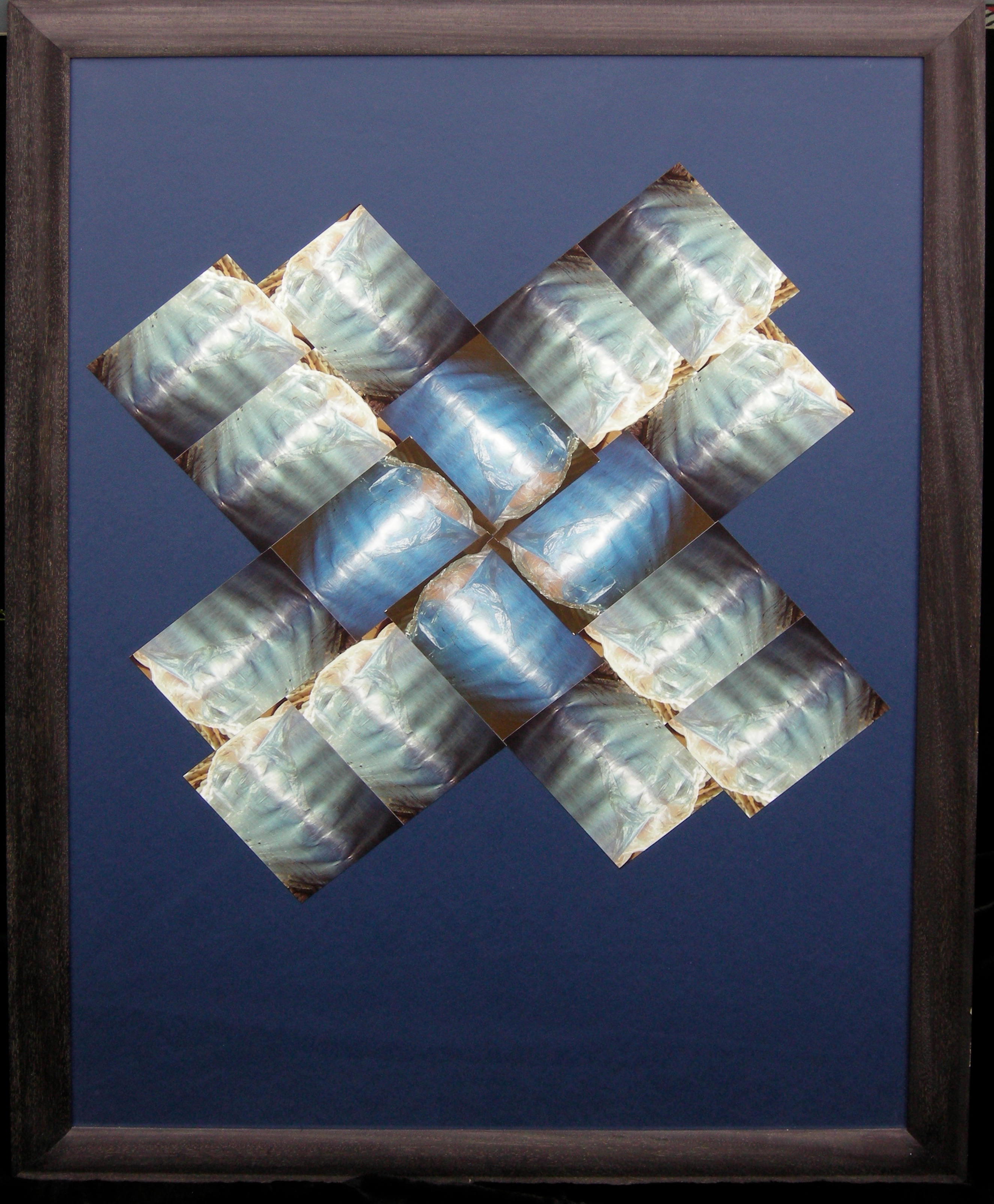 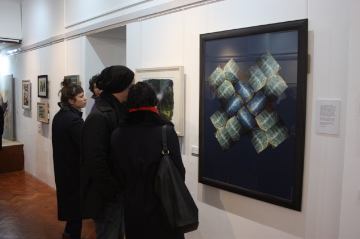 Karin exhibited at the Bermondsey Artists’ Group 30th Anniversary Exhibition at the Cafe Gallery in Southwark Park between 6 April 2013 and 21 April 2013.

The title Paper Bag is a play on the Bermondsey Artists’ Group (BAG), rag bag (the artists were free to choose their exhibit) and paper as the medium for the exhibition. Karin, to celebrate the BAG anniversary, selected works that reflect and reference Bermondsey’s history and the passing of time.

This work was created from photos taken in the P & O Spice Mill, Butlers Wharf, at that point threatened with closure and now defunct and luxury homes. 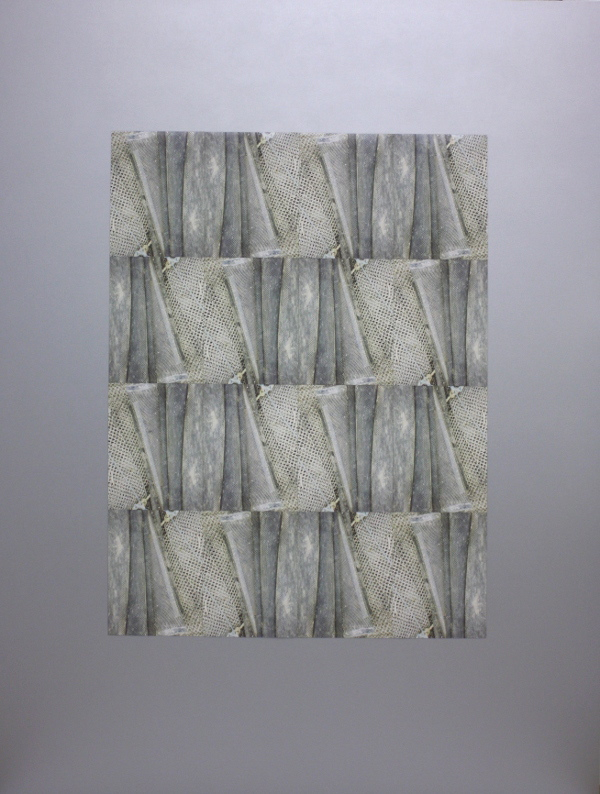 Edward’s Manor House in Bermondsey, once a great house on the Thames, lies half hidden under a grassy hill to protect its remaining foundations. To link the two houses Karin photographed the fading flowerbeds of Hampton Court Palace and created from these photos her work Royal Vintage. 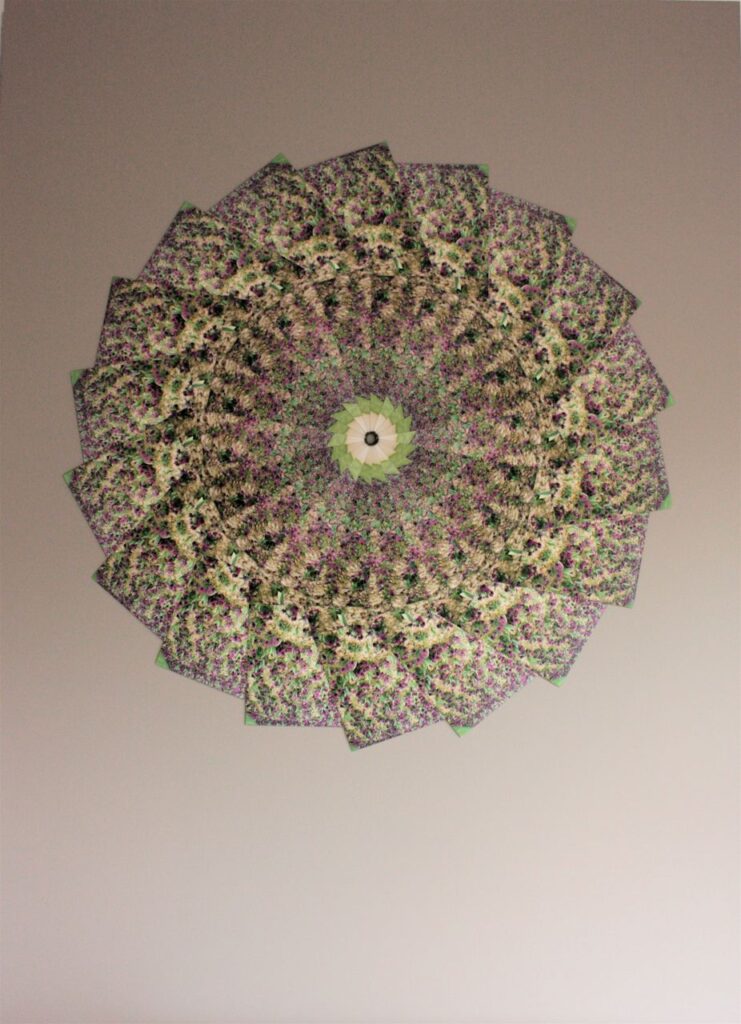 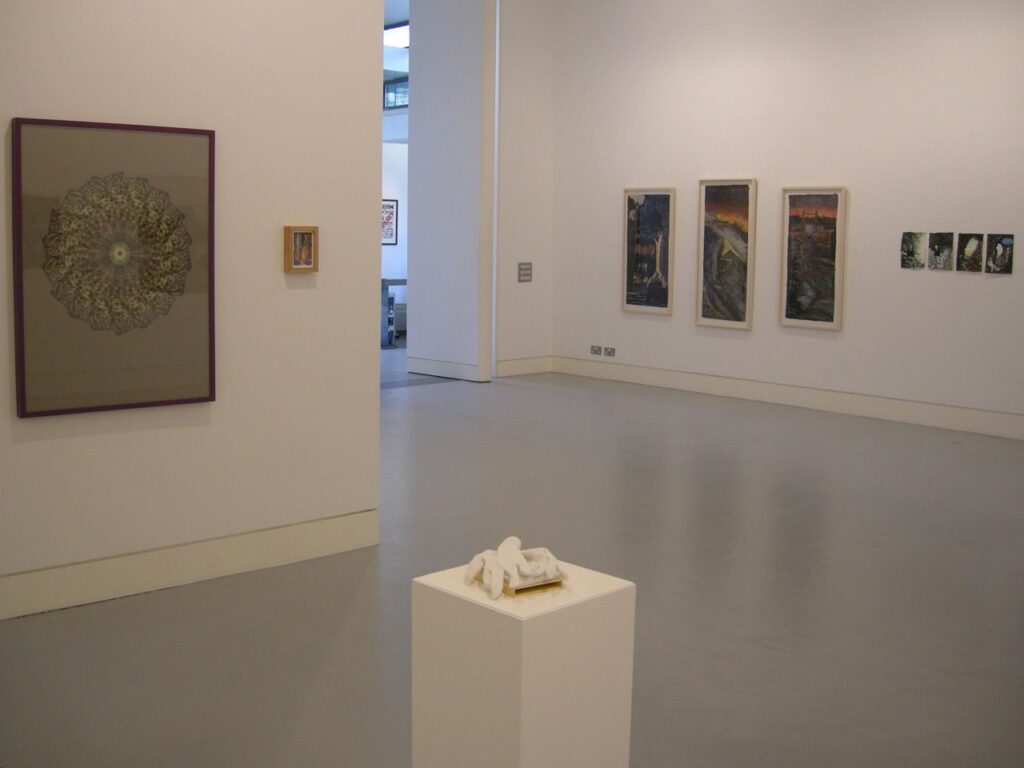 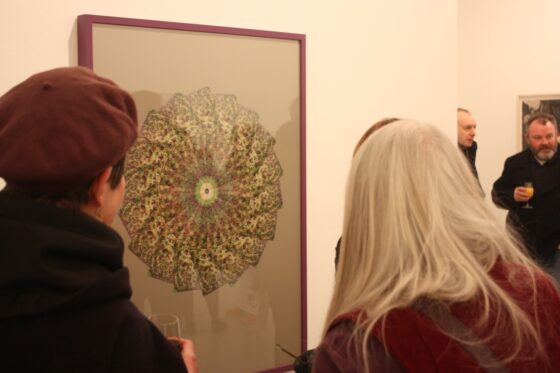 The exhibition ran from 2 – 7 May 2012.  Works  were selected to show the diverse practices of the group.   Karin exhibited 2 works not previously shown:  About Boats and Ring Road. 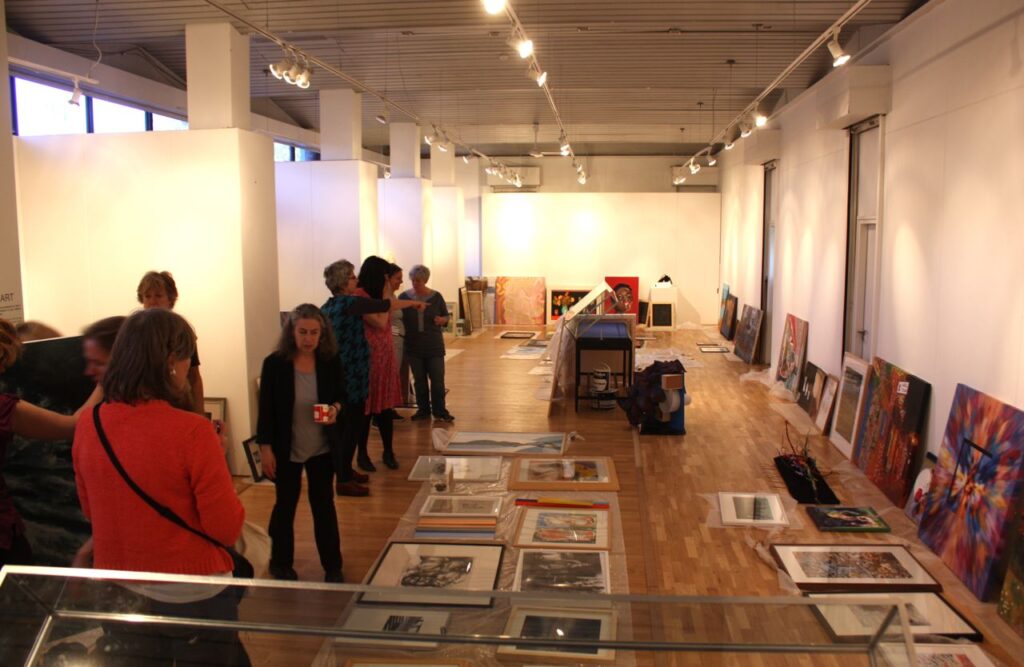 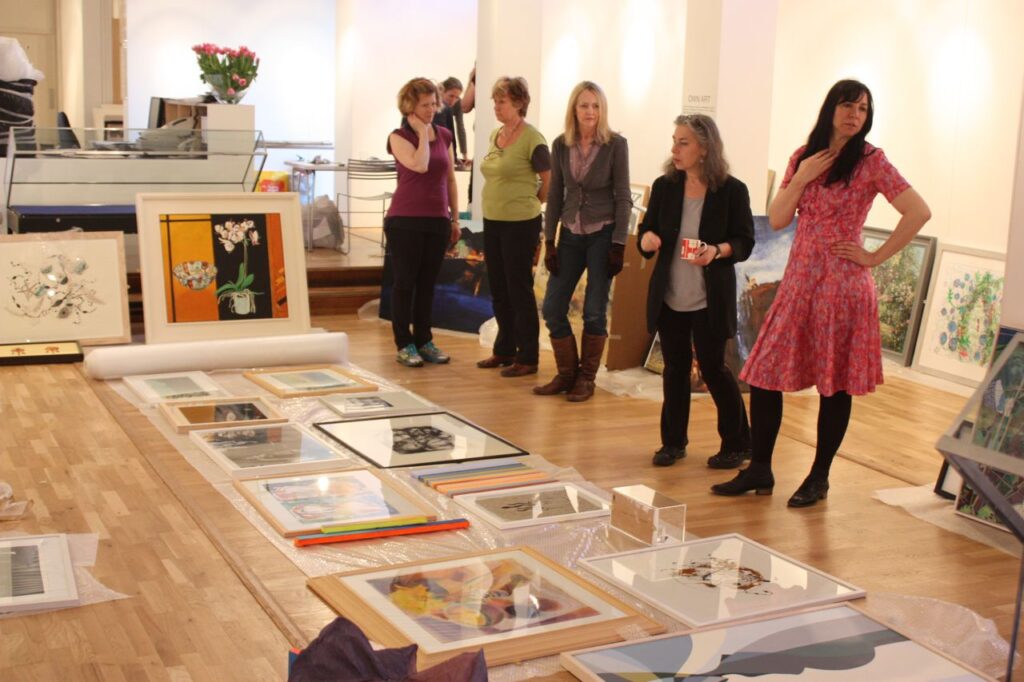 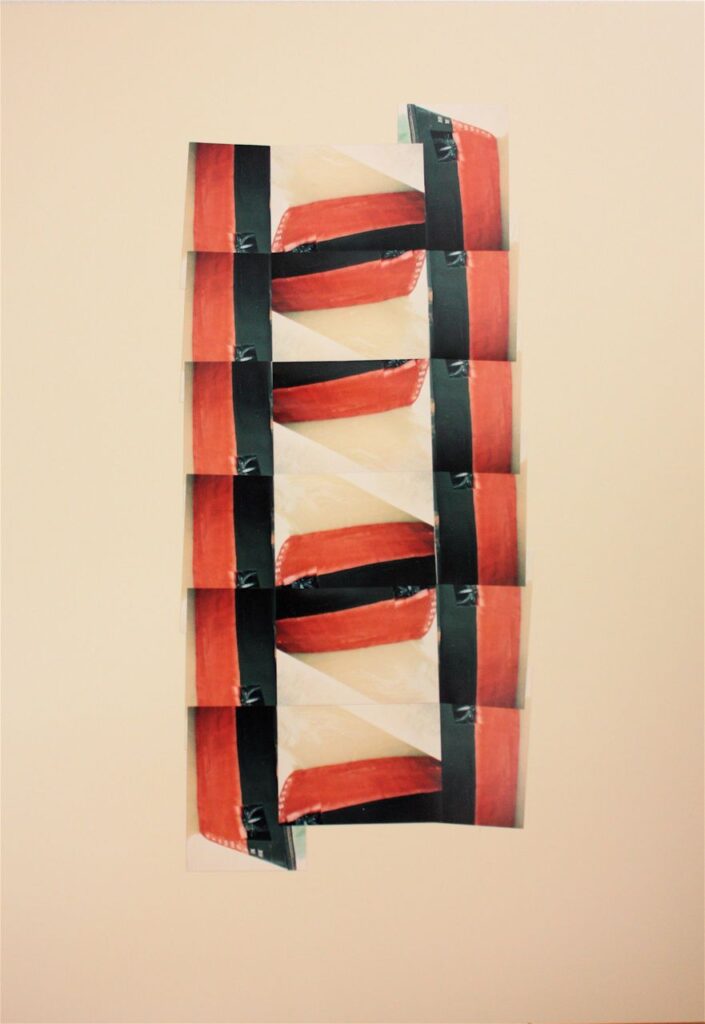 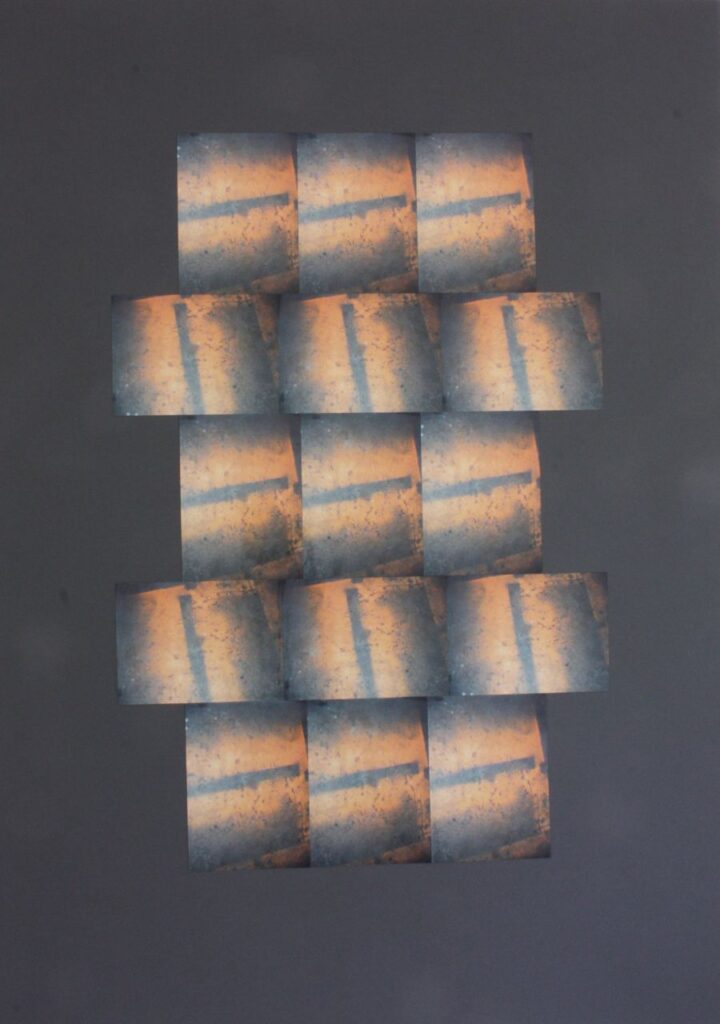 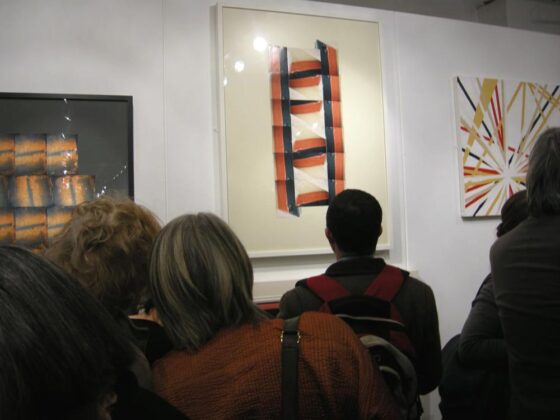 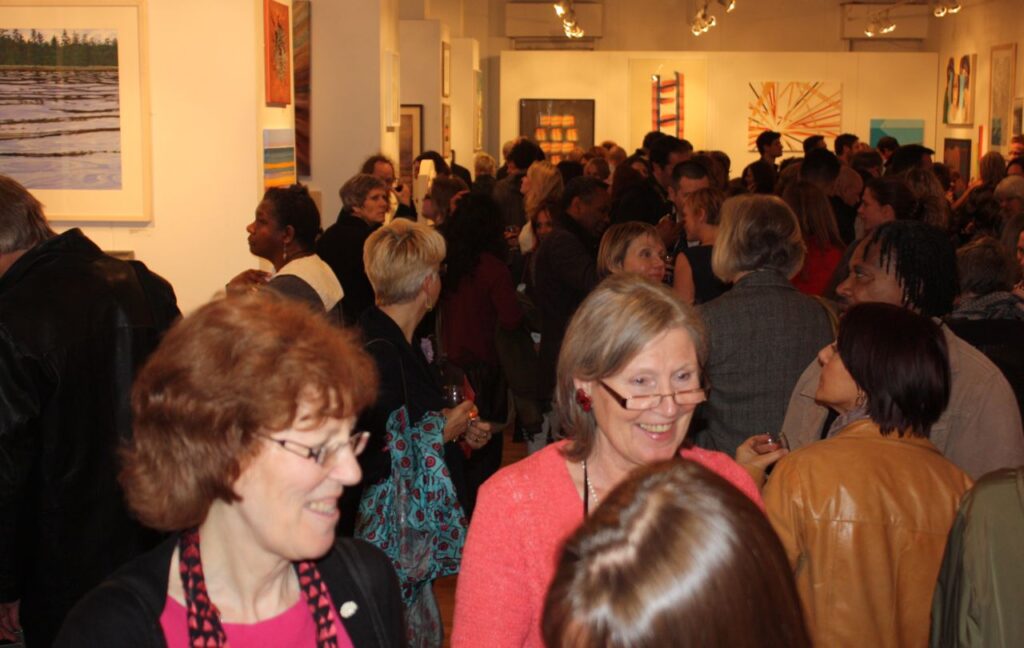 Karin was pleased to have been selected by Southwark Arts Forum to show work in this exhibition at the Volkshochschule Langenhagen, Germany. The exhibition was opened by the Mayor of Southwark and the Bürgermeister of Langenhagen.

Karin was asked by Southwark Arts Forum to give an interview for this exhibition. The film of the interview, which addresses the relationship between Art and Society, will be shown throughout the exhibition.  In this interview Karin also explains what it means to have chosen the ordinary photograph, which she takes herself, as her medium to ‘paint’, ‘draw’ or ‘sculpt’.

See Karin’s interview for the exhibition  (subtitles in German)

Karin selected 2 works for this exhibition : Heavens Below from her Bankside Power Station cycle and Pigeon Hole from her Thames cycle.

This work was created from the multiples of 1 photograph showing a puddle and sludge on a concrete walkway. The puddle reflected the structure of the roof (still visible today above the turbine hall of Tate Modern). It also referenced both the innumerable metal grid gangways criss-crossing the cavernous interior to dizzying heights and the space and mood of the building that had come to the end of its life before its rebirth into Tate Modern. 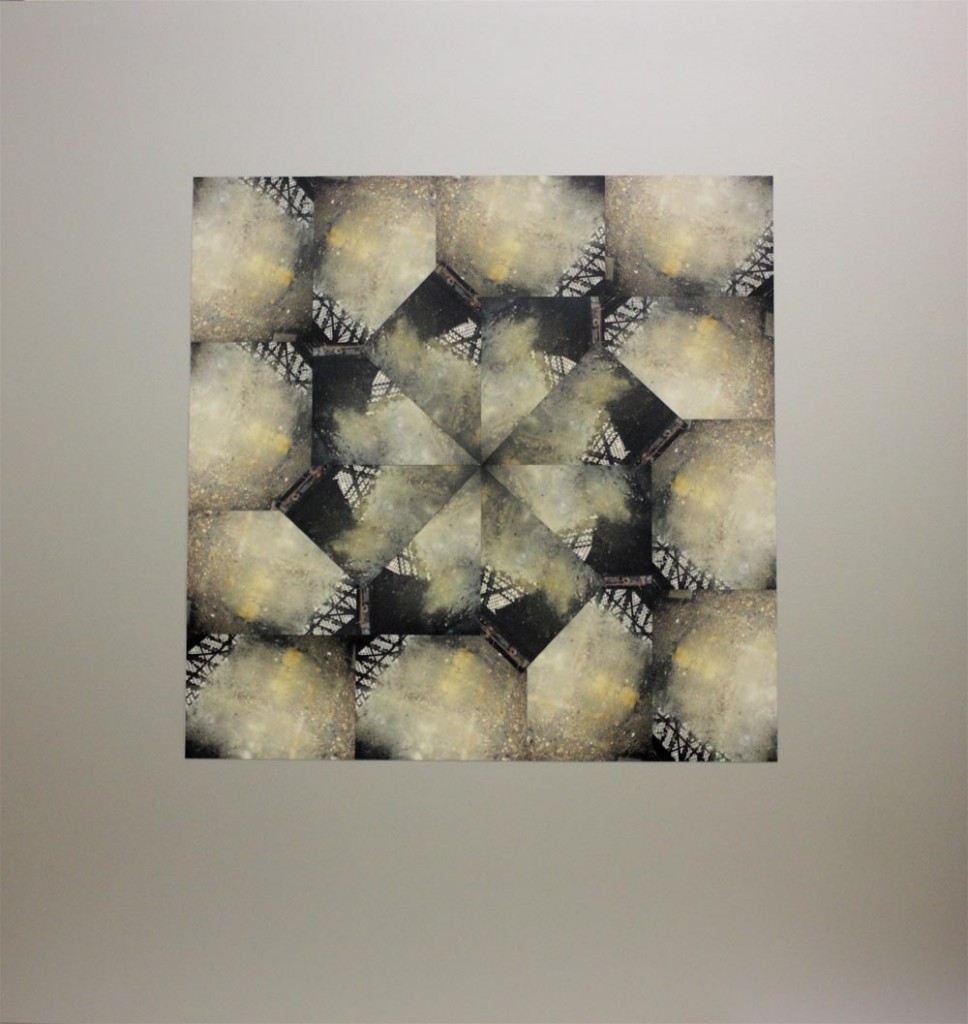 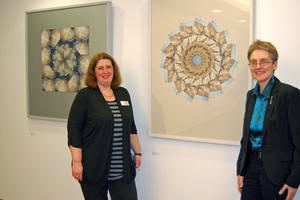 Karin was selected by Southwark Arts Forum to show in this exhibition which forms part of the Frauenkulturfest in Langenhagen, Southwark’s twin town in Germany.

Karin showed her work In His own Image in the Bermondsey Artists’ Group’s Concretum exhibition at Dilston Grove, London from 10 to 27 March 2011. 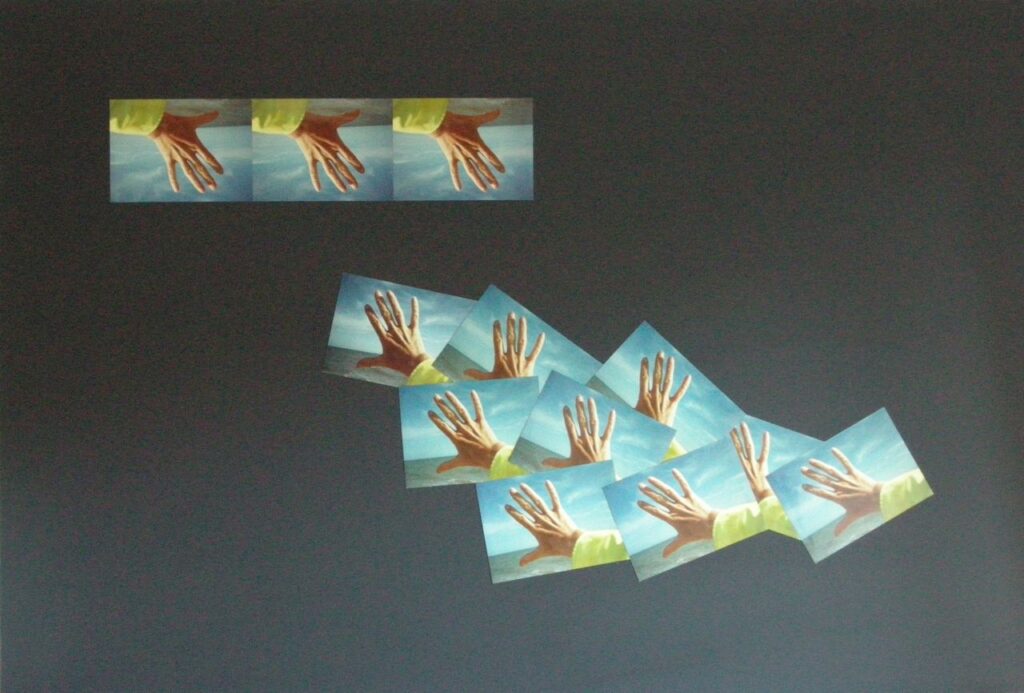 In his own Image 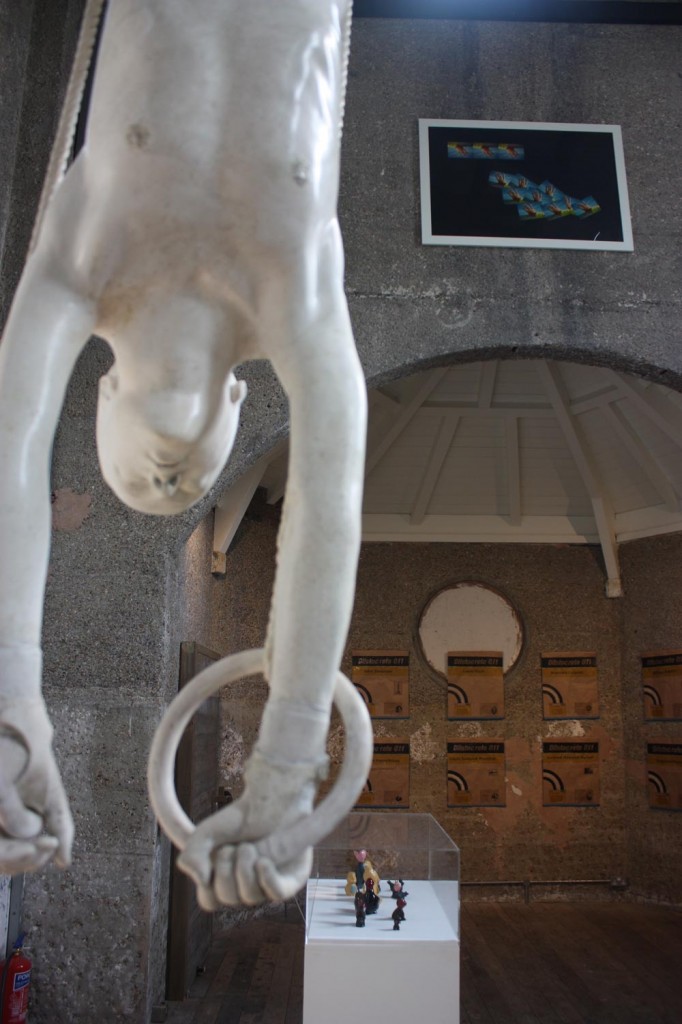 In His own Image at the exhibition 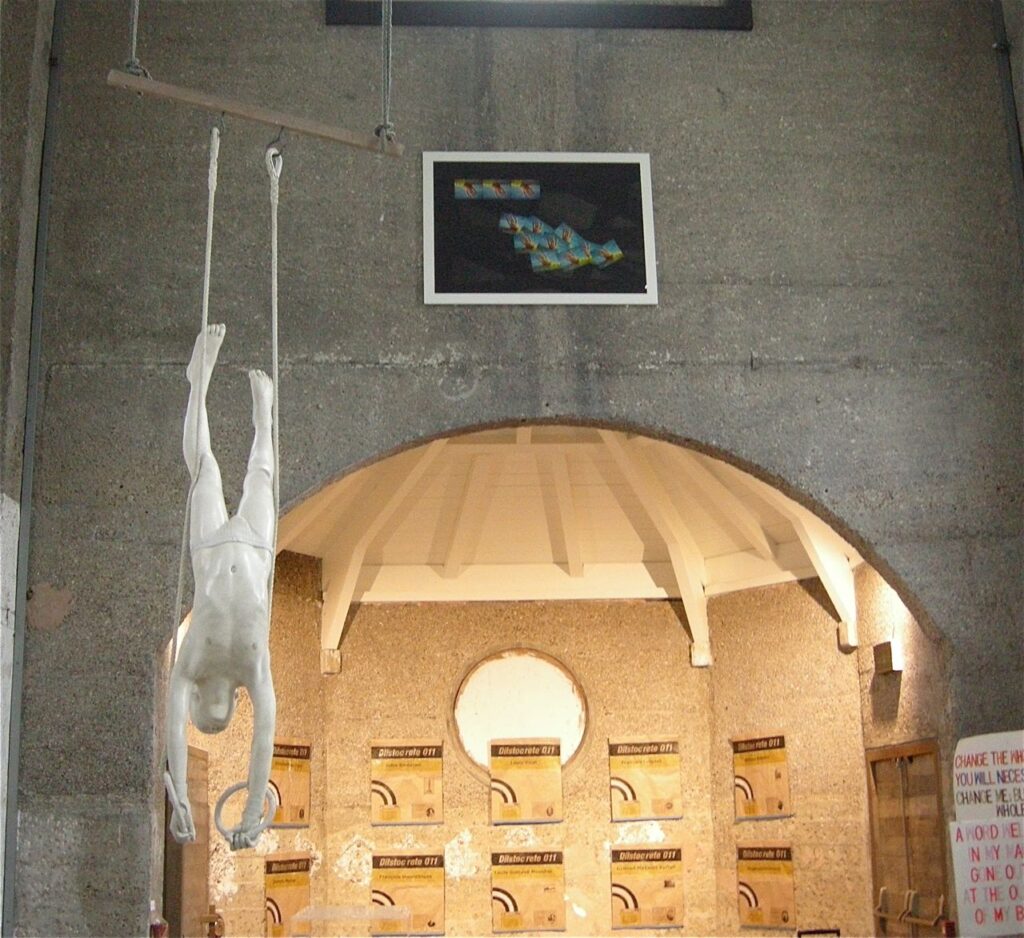 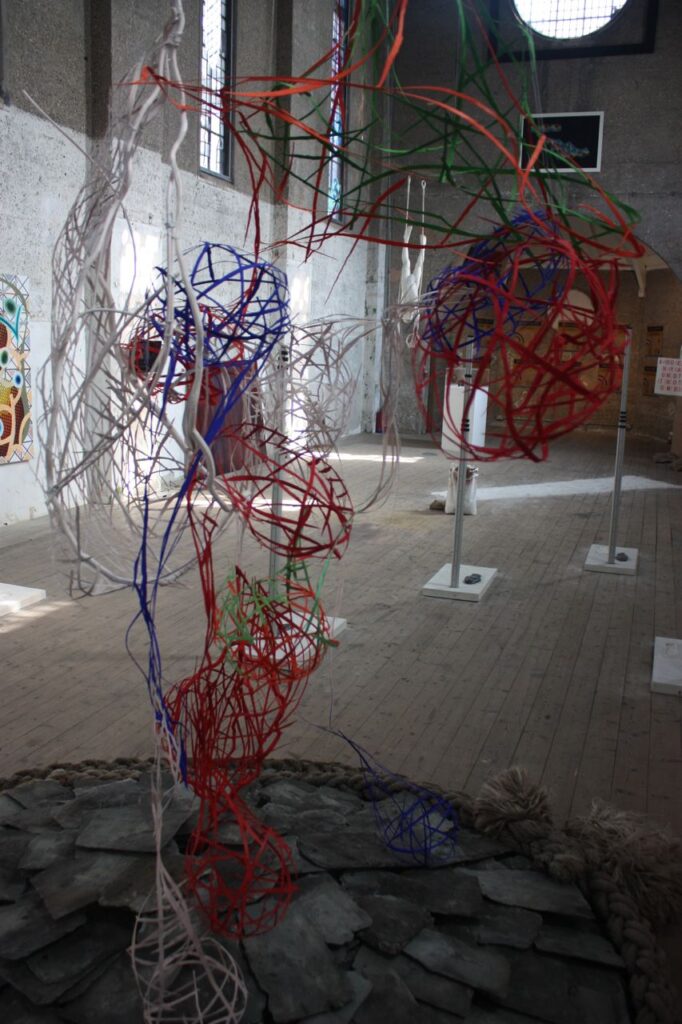