Karin was delighted to have been offered a solo exhibition by the Candid Arts Trust, Islington, London. This took place between 1st and 6th February 2011. Karin would like to thank Professor Dawn Ades for opening the private view and was honoured that Herr Cord Meier-Klodt, the German cultural attaché, attended. 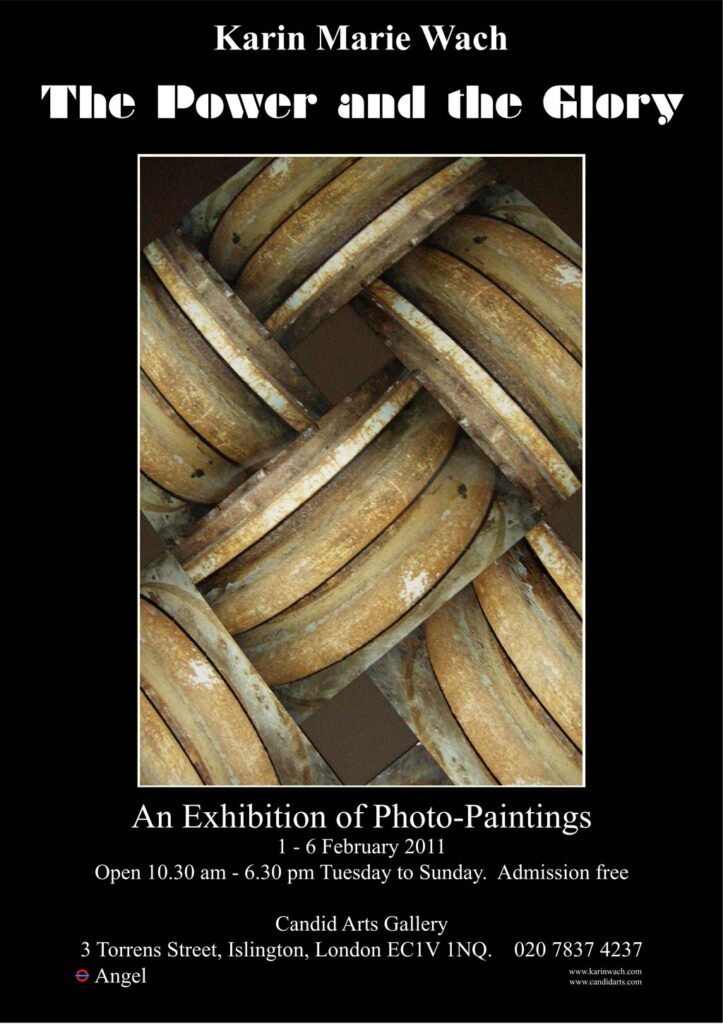 The exhibits are of the de-commissioned Bankside Power Station before its conversion into Tate Modern and after the interior of this great cavernous building had been ‘washed down’ to remove asbestos dust. Resulting from this de-contamination process, every unpainted surface, every pipe had started to rust and looked like a work of art.  Karin took hundreds of analogue photos of a mere detail. From the multiples of one, rarely two photos she then created an abstract image. These constructed images, mounted on sprayed board, explore through their formal layout and content the complexity of the building,  its function and history that cannot be photographed. Images of machines appear to work; colours remind of age-old frescoes; pipes take on Romanesque forms linking the building to the great cathedrals of the western world; a puddle on a concrete gangway becomes an artwork on the floor, site-specific and testifying to the passing of time; pipes shape into the flowing river without which a power station cannot function.  Karin also wanted each artwork to achieve via the medium of a single photograph the quality of, for example, a drawing  (Gates), sculpture (The Turbine Triptych) or painting (The River).

There are some sixty artworks created over several years. Twenty-five of these were shown, as well as six experimental works unconnected with the Bankside Power Station cycle. 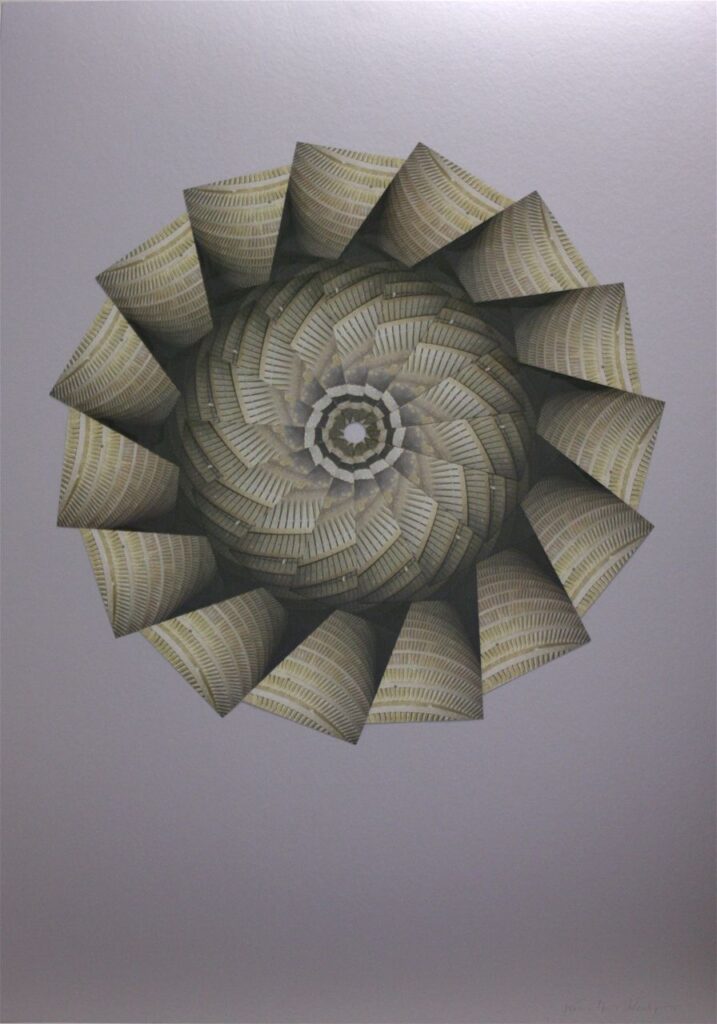 Turbine Triptych
Three panels, two are multiples of one photograph and this centre panel multiples of two photographs, all mounted on board under glass.
Each 112cm x 82cm 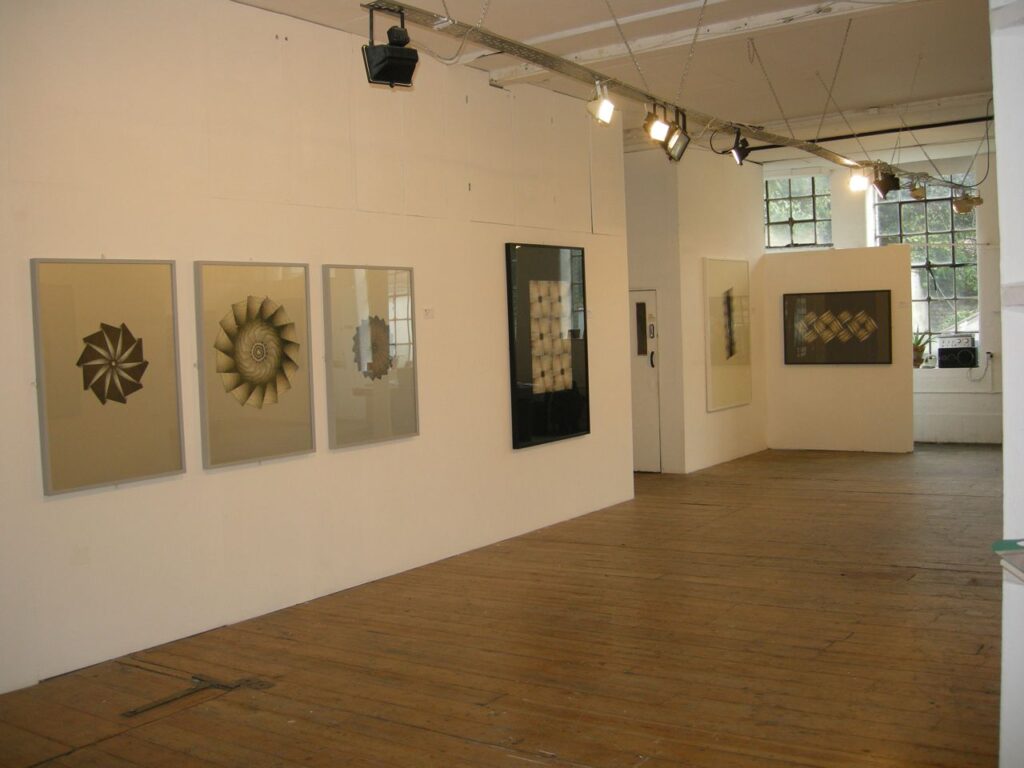 The title refers to what is not in the photo: the river Thames at low tide. Instead I photographed the base of giant cylinders or pipes rising inside the tower. 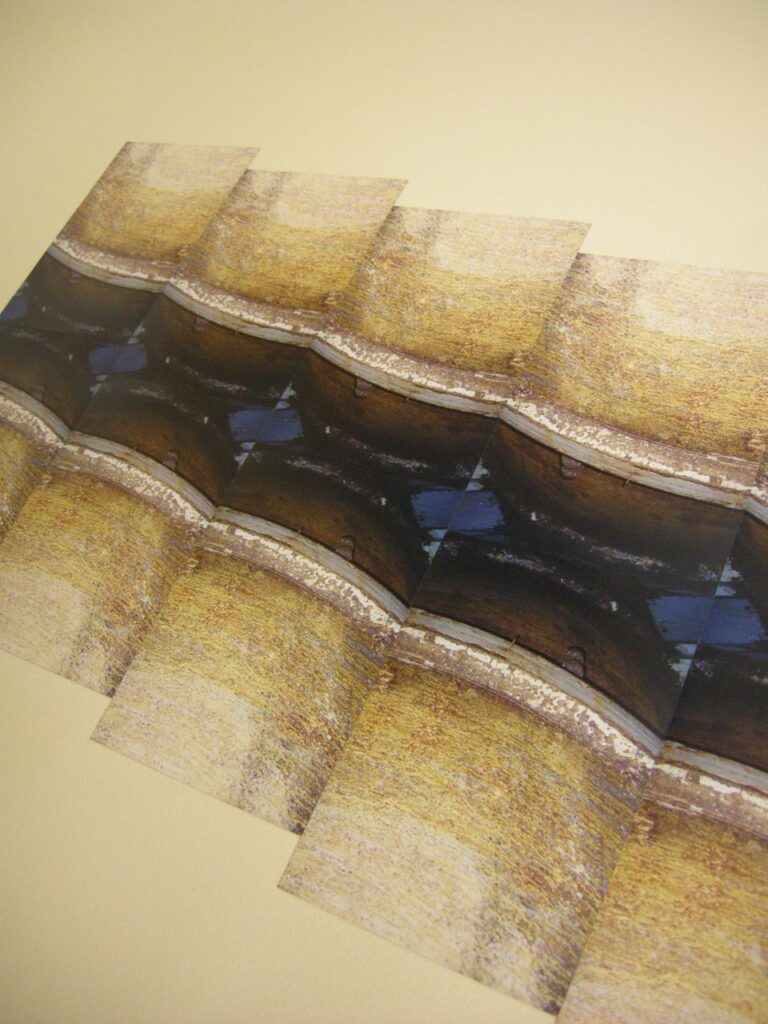 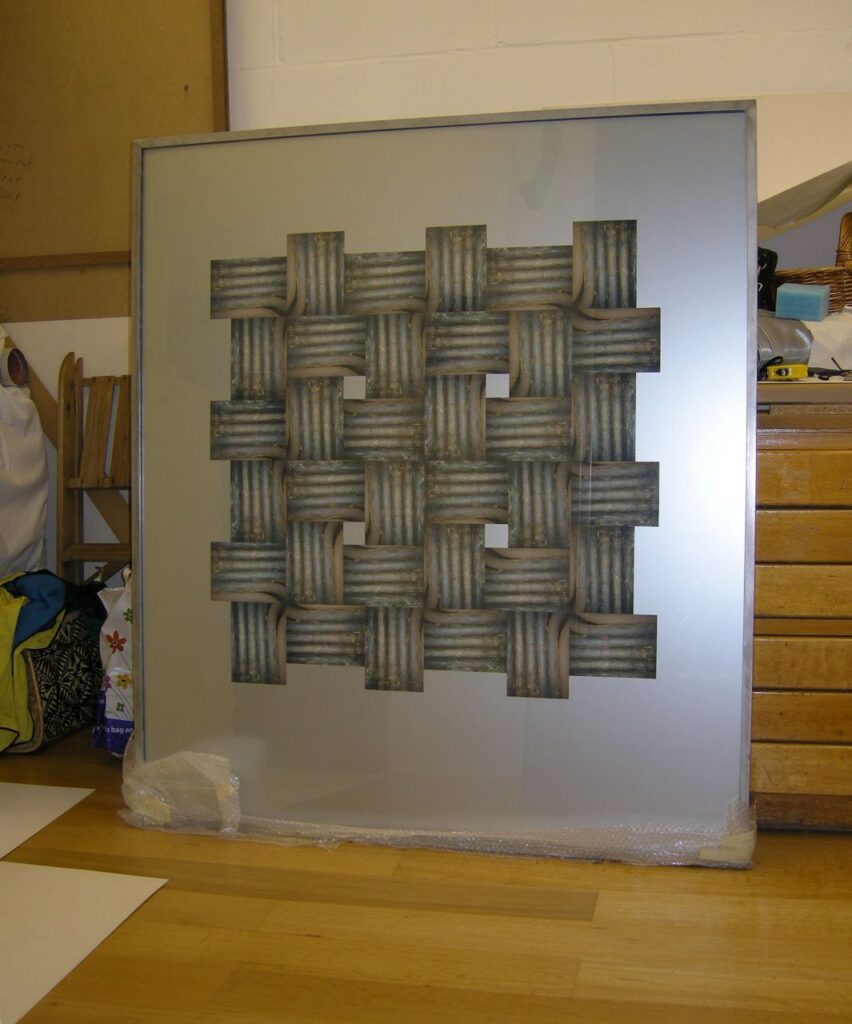 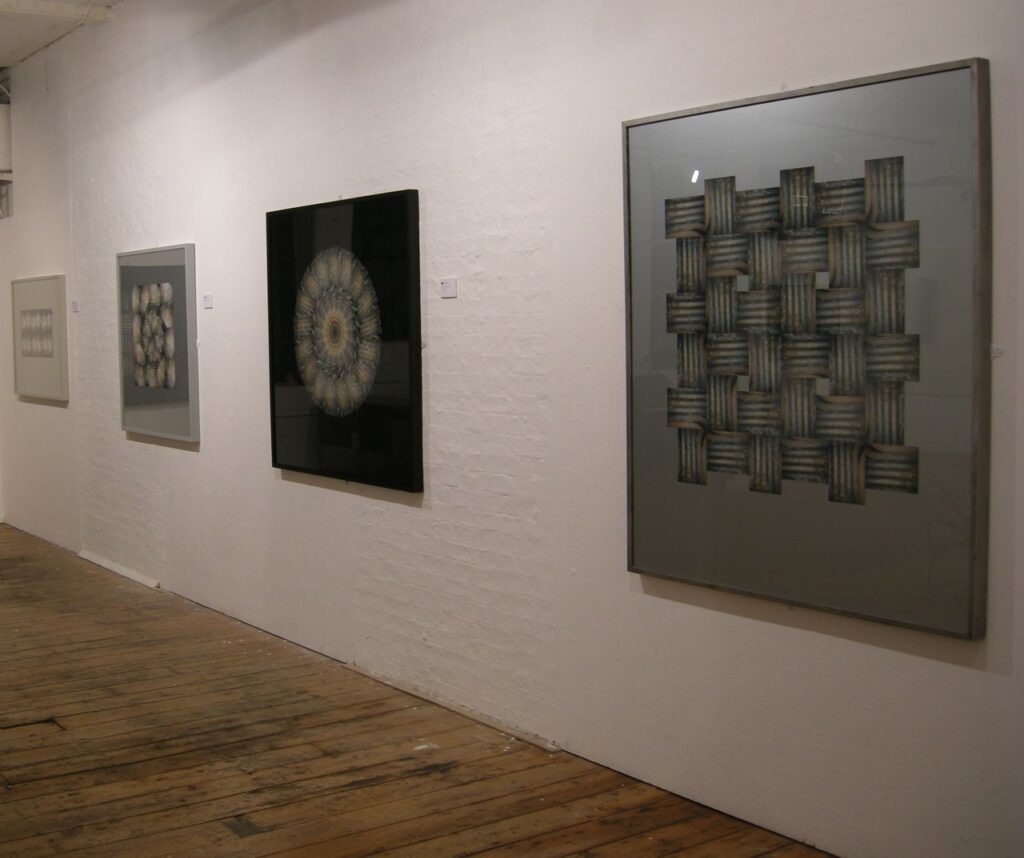 The single photograph is of a gate at the South side of the Bankside Power Station.  By repeating the same photograph I achieved a similar ‘concertina’ effect as well as the quality of a pencil ‘drawing’. 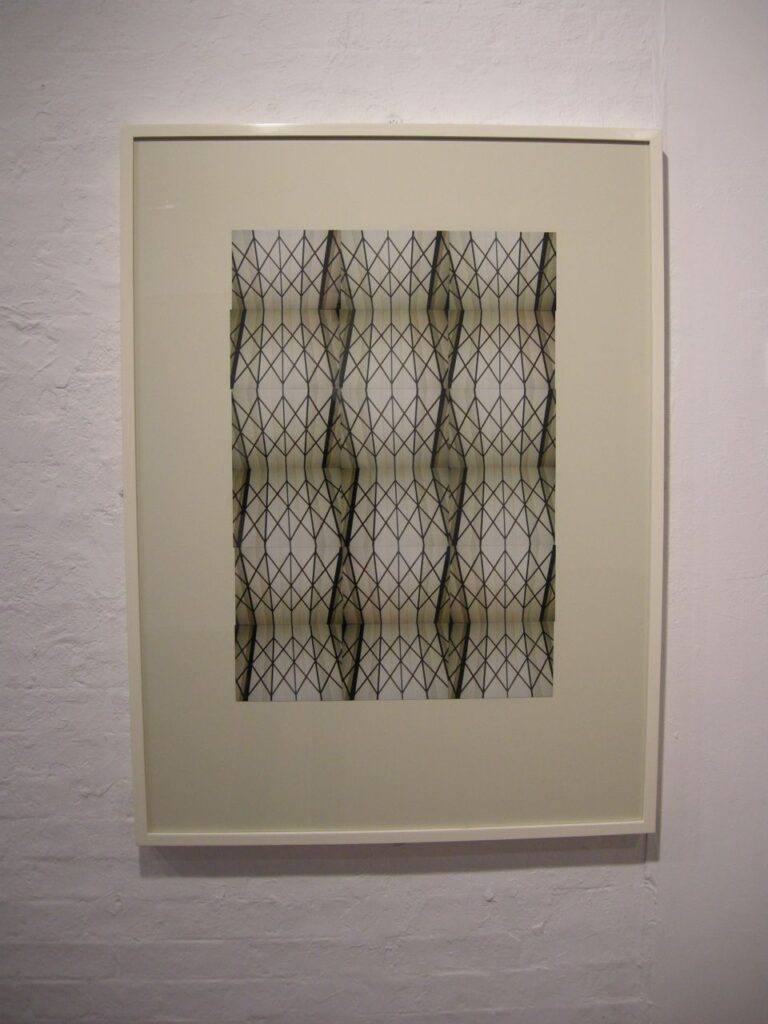 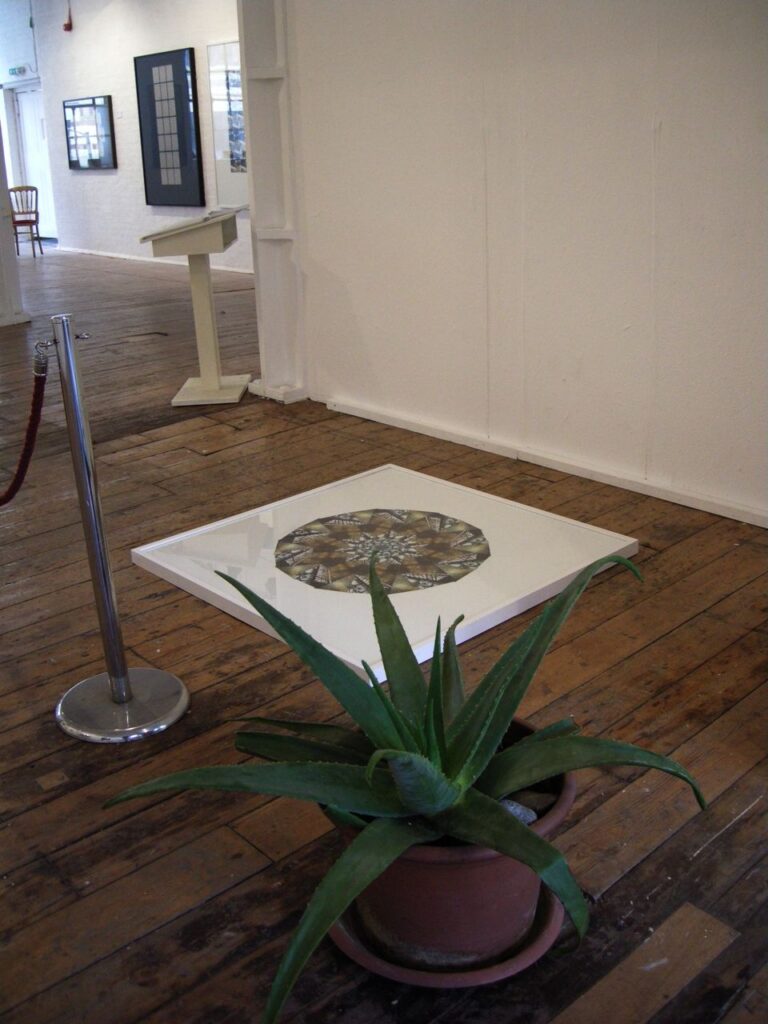 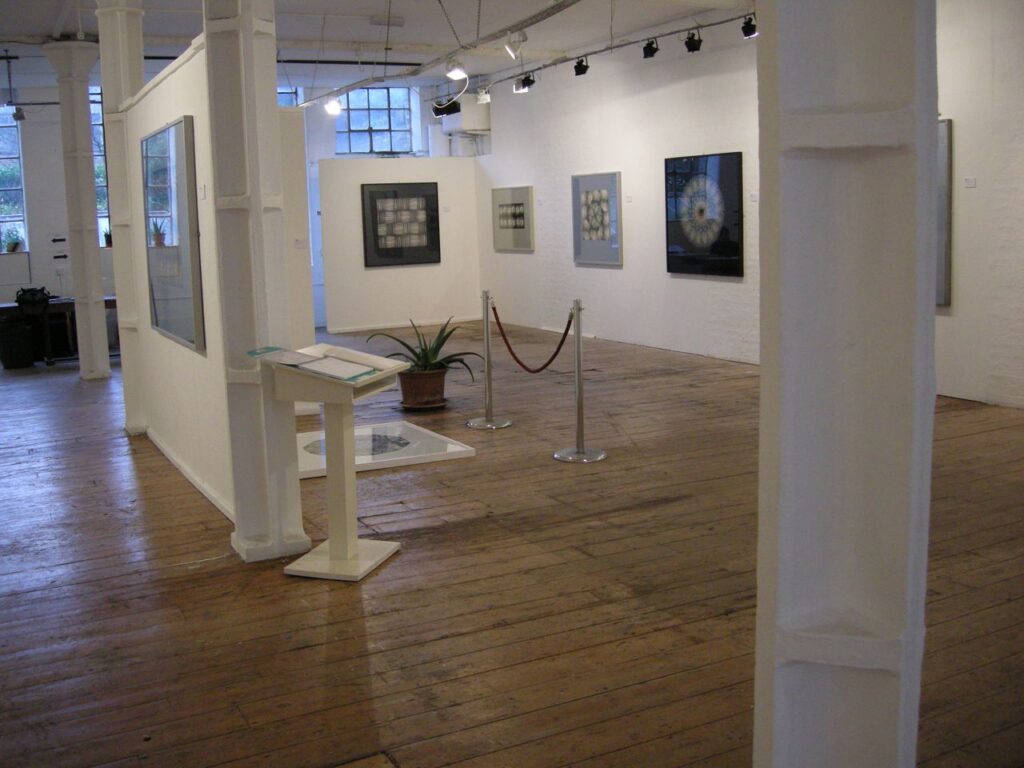 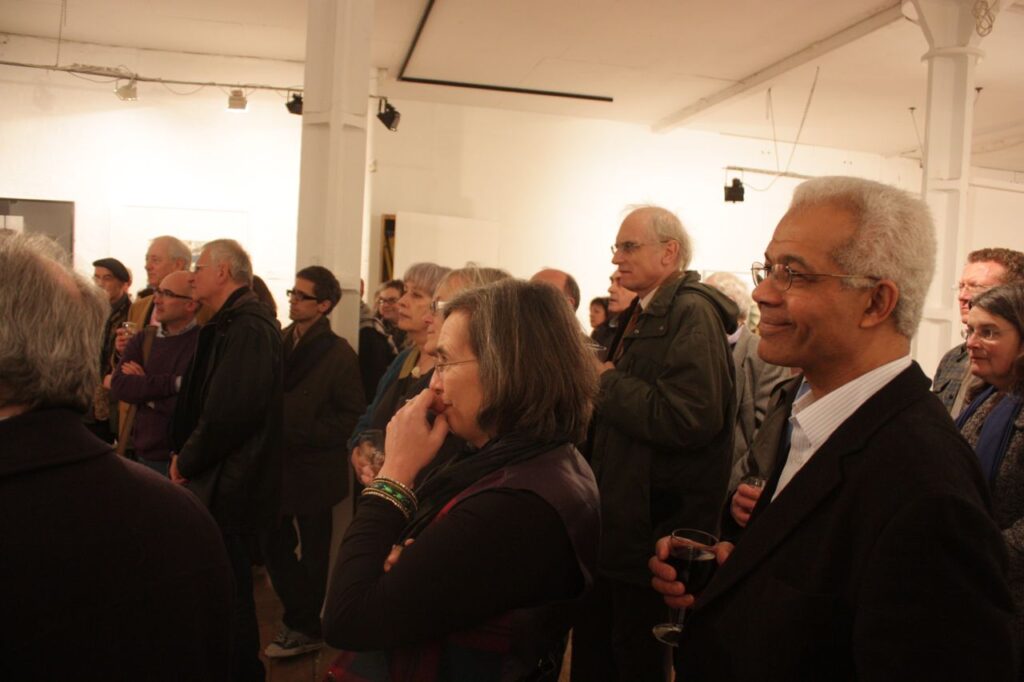 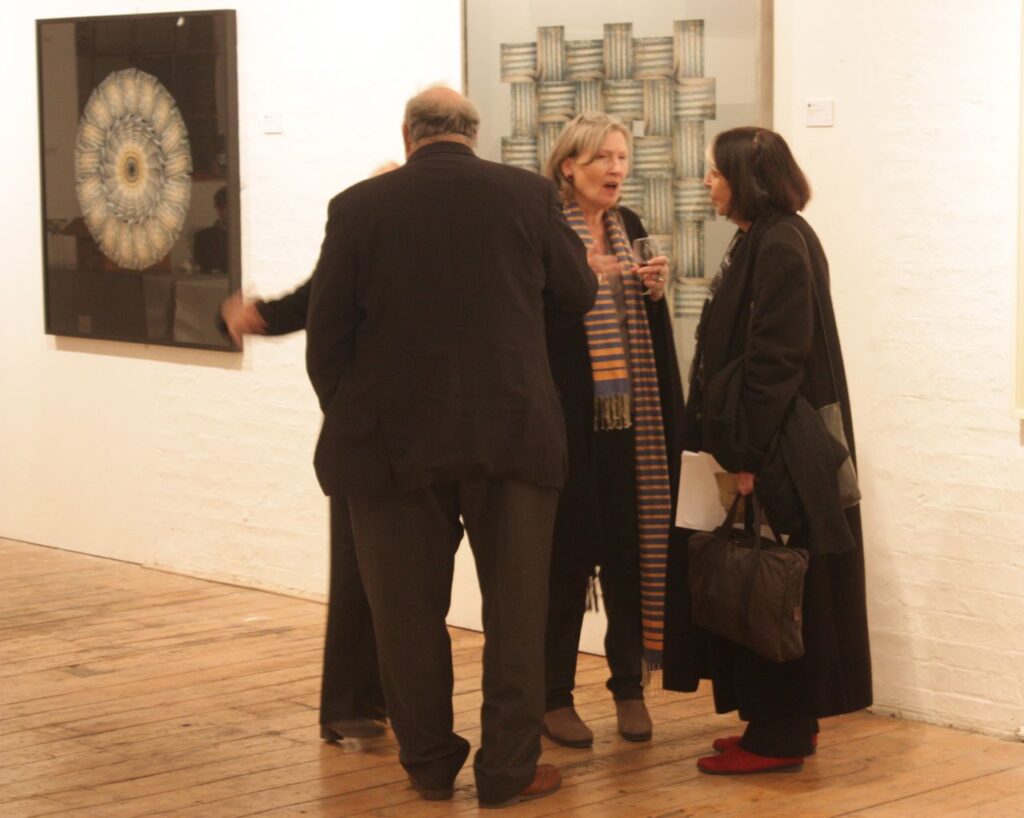 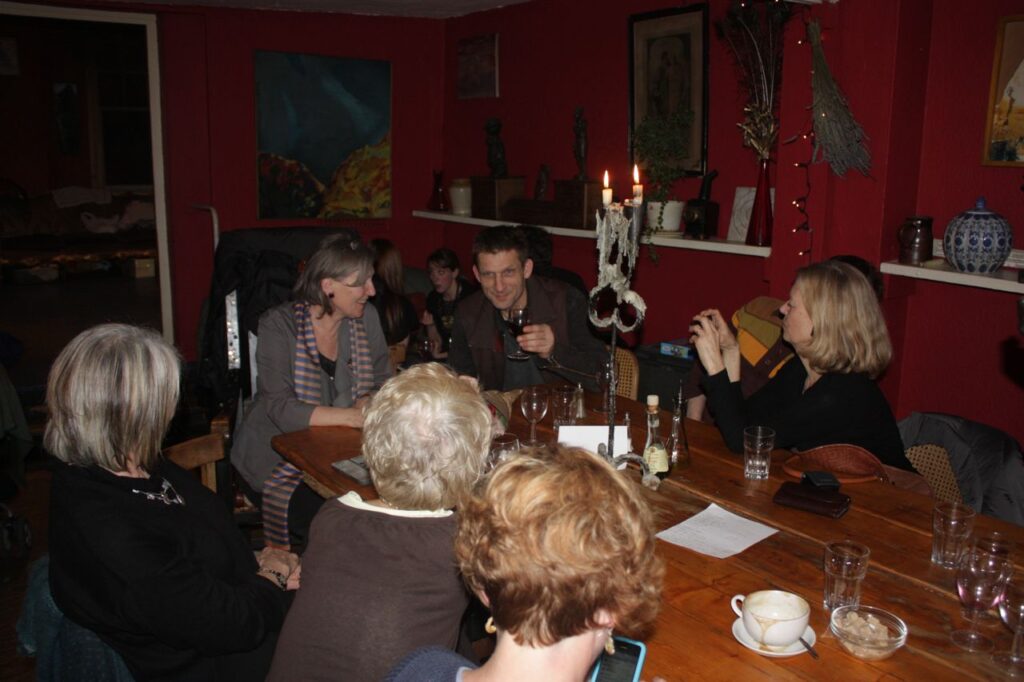 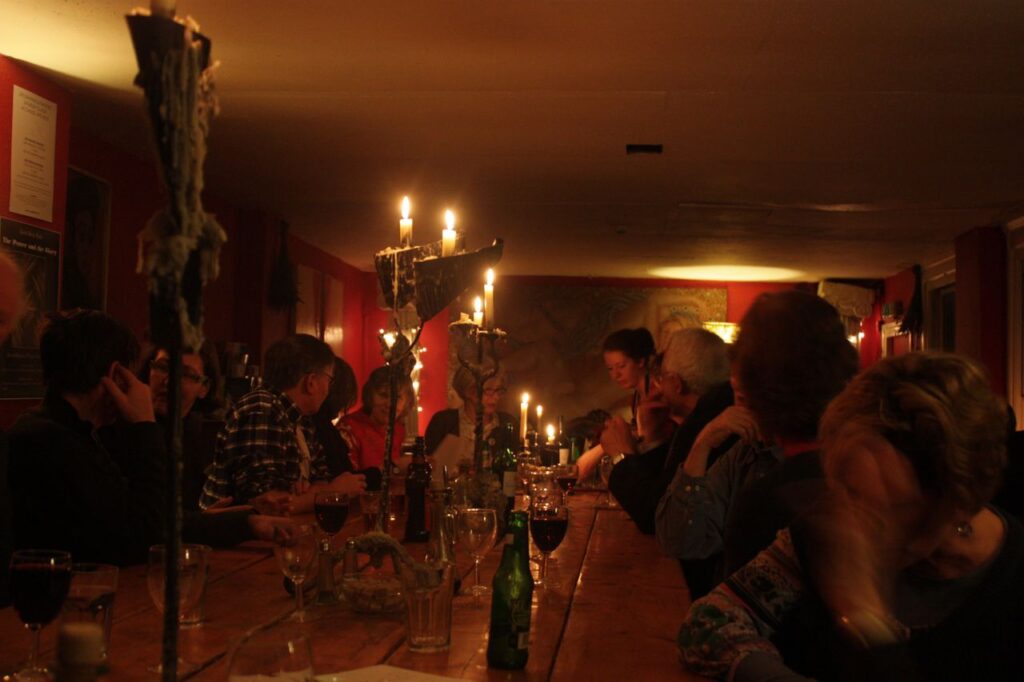 Karin was invited to become a member of the South London Women Artists. She had work in their exhibition at Bankside Gallery, 48 Hopton Street, London SE1 9JH from 28 April to 3 May 2010. 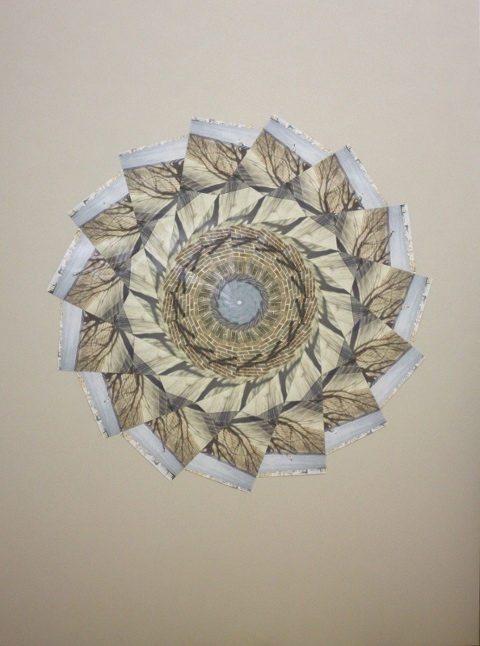 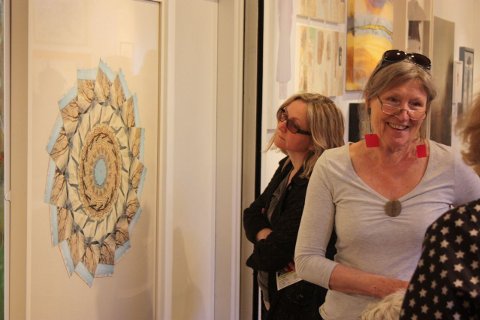 Karin talking about her work

Karin showed a selection of her work (not quite a retrospective – as yet) at Candid Arts in Islington. On the basis of this exhibition the Candid Arts Trust have offered her a week-long exhibition at the same venue in February.

Karin exhibited some of her work at Rummage, an exhibition by the Bermondsey Artists’ Group. 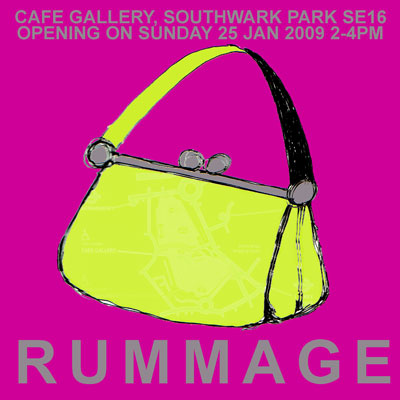 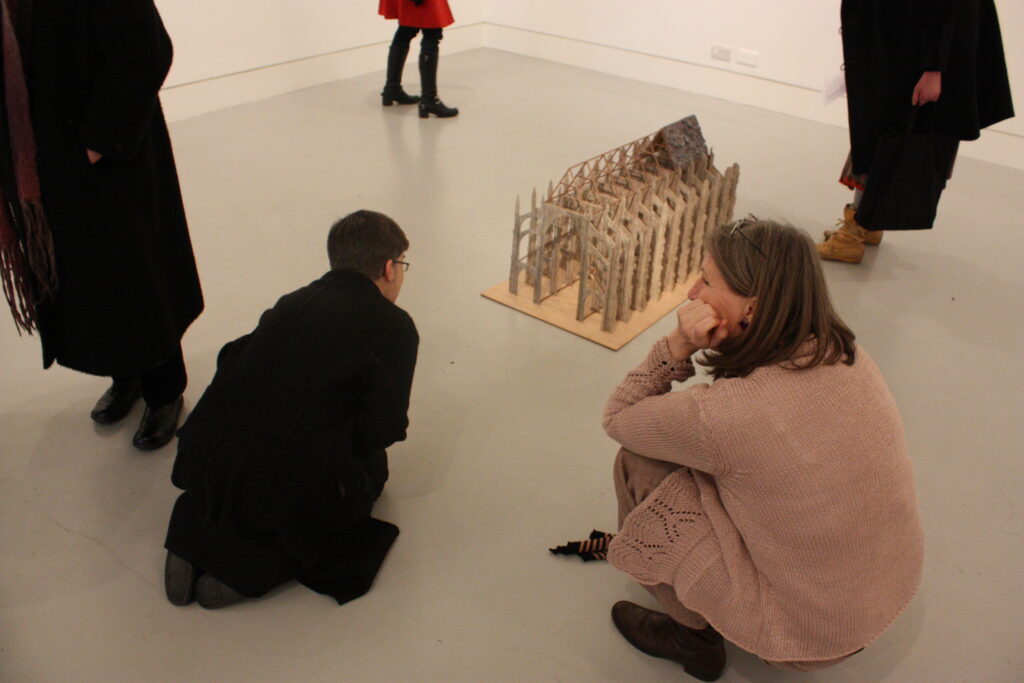 And here’s Piped Down in the exhibition: 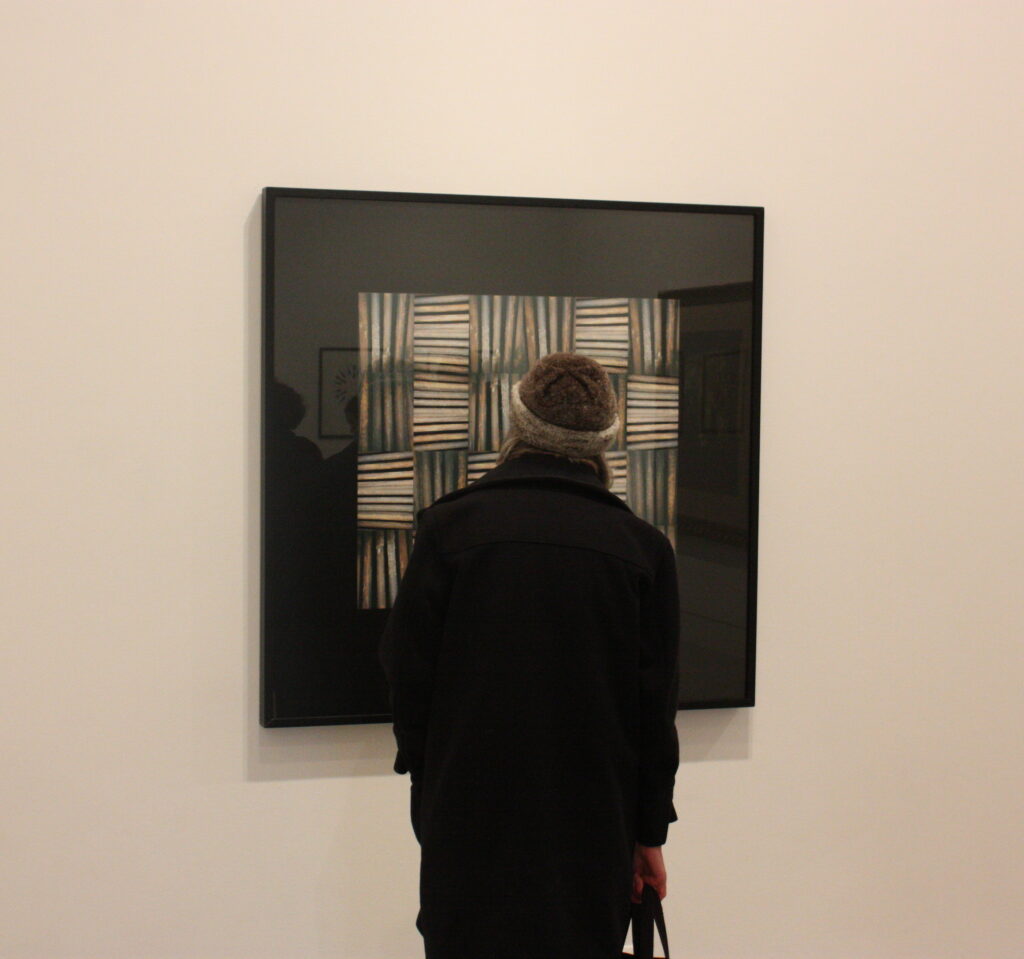 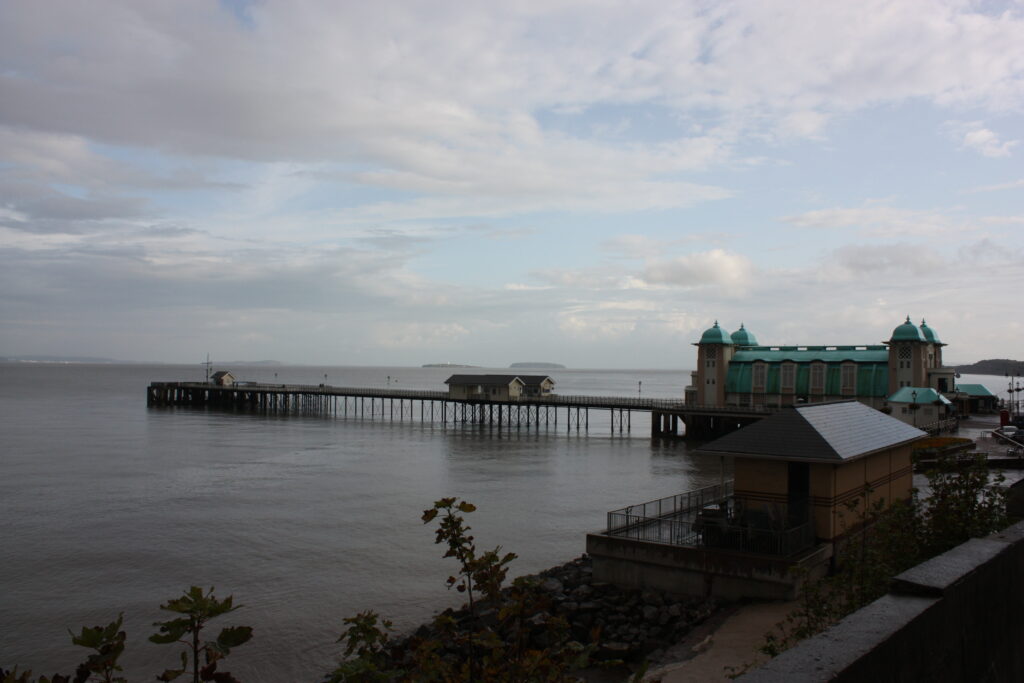 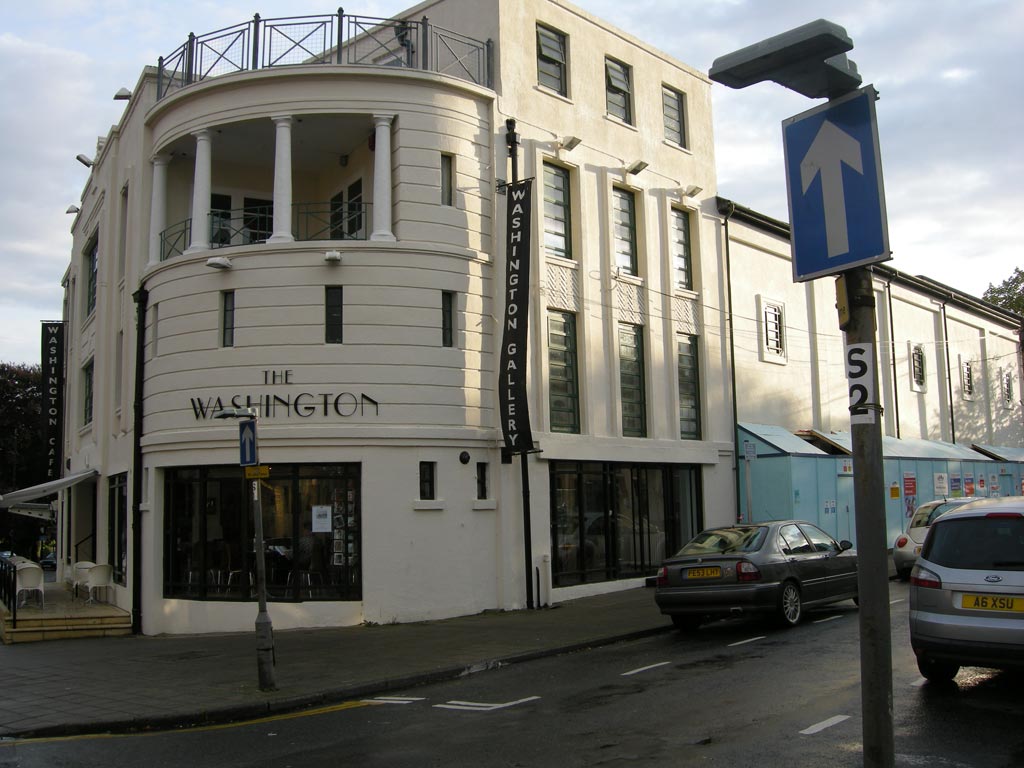 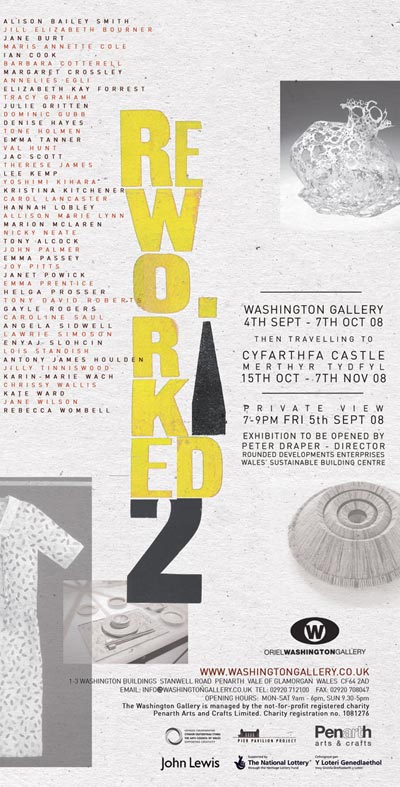 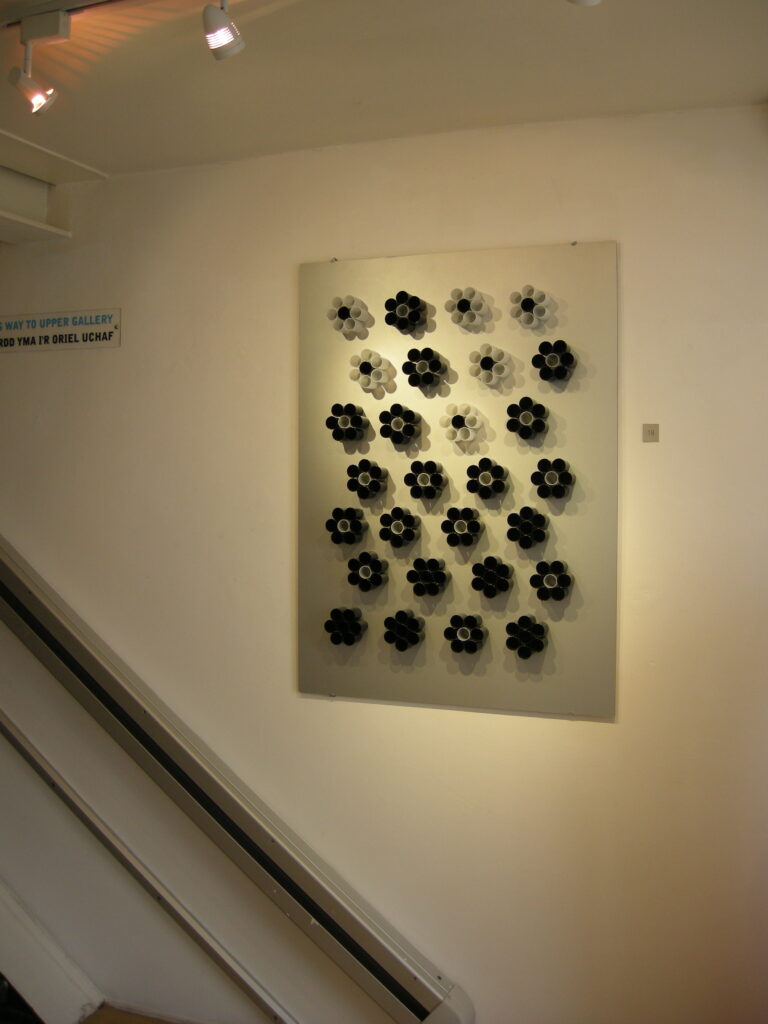 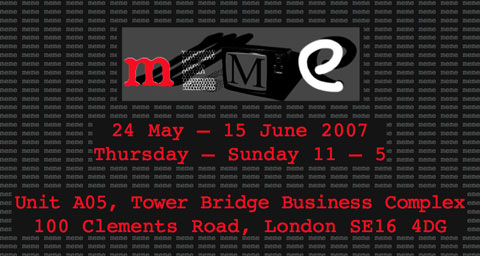 For this exhibition I  created two works, Meme x 2 and Meme Encounters that made visible the life cycle of such ideas, believes, fashions which are taken up by society at one point in time and then dropped and forgotten when another idea, attitude takes over, e.g. ‘Waste Not, Want Not’ has been discarded in favour of ‘Out Of Sight, Out Of Mind’. Litter, in the widest sense of the word, spreads through our environment like a virus for which we have no thought or cure at present.

On MDF board sprayed with silver car paint I have arranged in rows black film containers in a shape resembling a flower head. Within a row a new flower head (new idea or meme) appears in that it has a white centre. It spreads through the following rows till it has gained ascendancy over the black flower heads and is itself ‘invaded’ by a new flower head (white with a black centre). It goes without saying that these containers are normally thrown away. 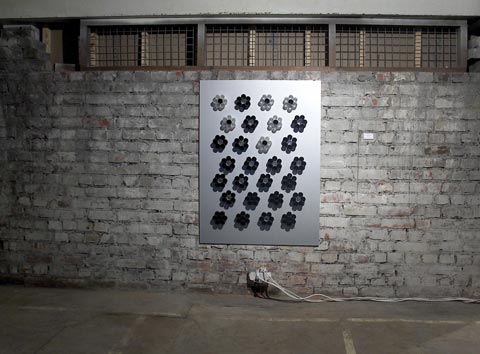 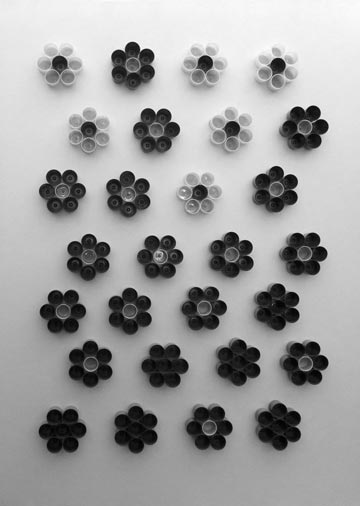 The installation (the Return of the Unwanted) shows how a Meme may be superseded for better or for worse, in this case surely ‘for worse’. 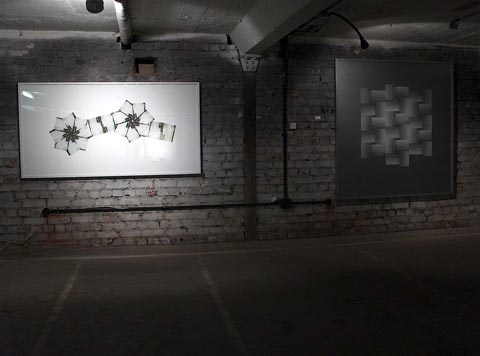 The third wall-hung piece is a ‘River of Litter’, after which you enter a dark damp room. Gulls are screaming and waves crash on the beach, only this beach is rubbish that I collected from the Thames foreshore at Bermondsey. It is as if it has finally poured out of the paintings. In the course of collecting the rubbish, I found 25 white plastic bottles containing a message each. 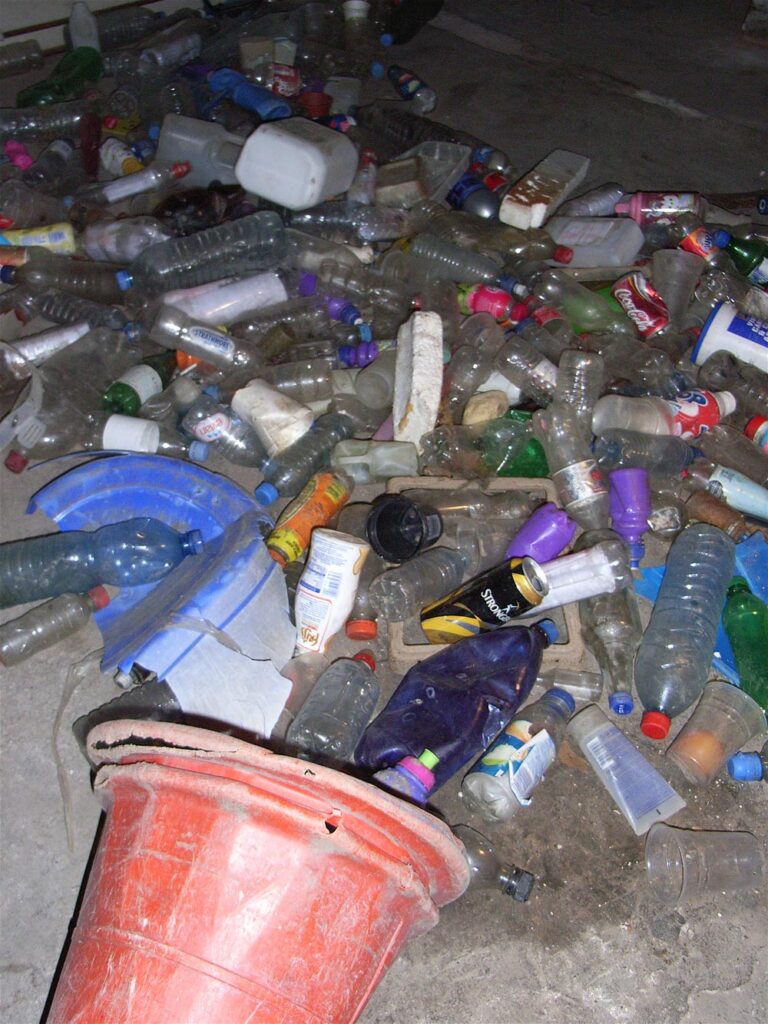 After the damp room, a sculpture suspended from the ceiling forces the viewer to push aside a bicycle wheel (retrieved from the river) to view a photo attached to a squashed bottle. This photo shows rubbish dumped in front of gate with the sign ‘Please do not obstruct’. The viewer is physically forced to engage with the rubbish – a non-verbal message. 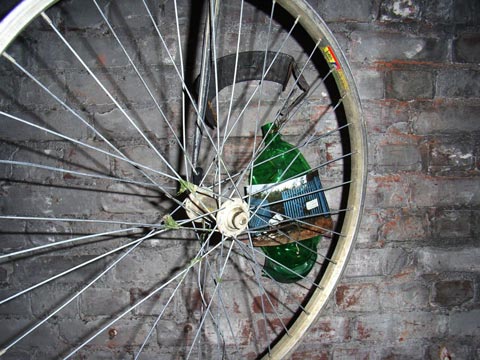 Message in the bottle mystery solved

I had not wanted to open the bottles but eventually managed to read one of the messages through the bottle. I realized that they had not ‘sailed’ very far but had come from the nearby Riverside School. I invited the kids to the exhibition.  They had a wonderful time running through the vast exhibition space of the former Peek Frean Factory in search of their postings. 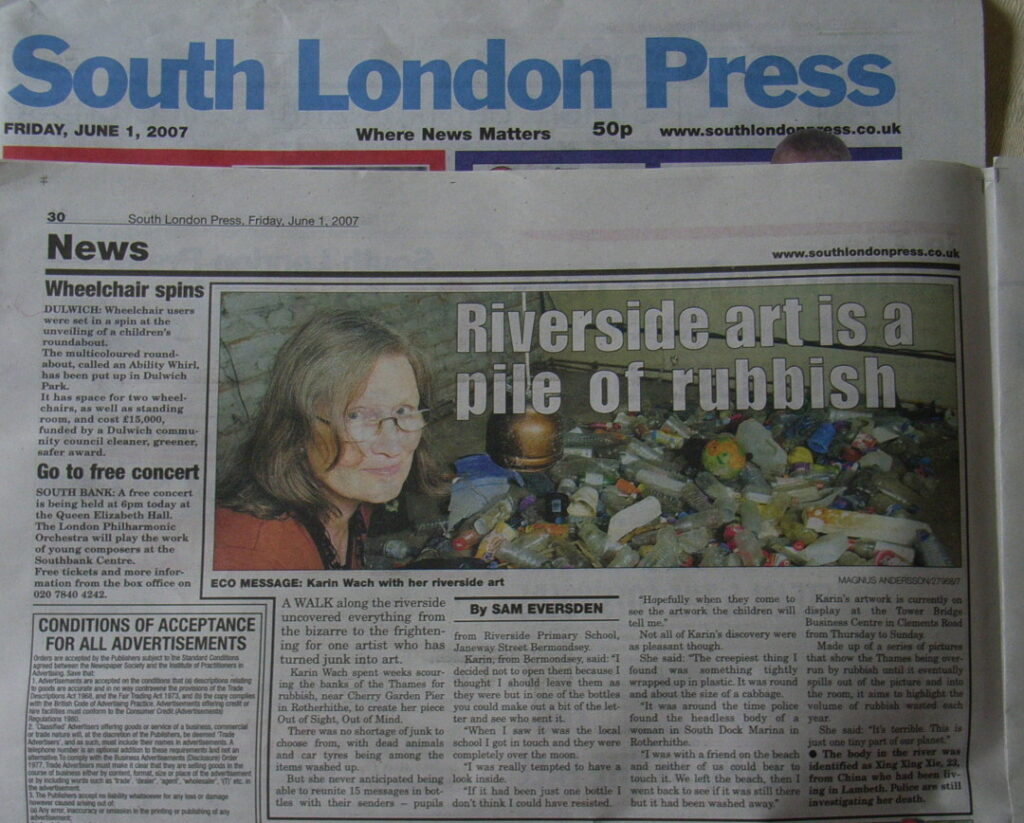 Some of Karin’s work was featured in the Janus exhibition at Cafe Gallery Projects London, Southwark Park SE16 from 18 January – 4 February 2006

The promotional flyer had this to say about the theme of the exhibition:

Janus is the Roman god of gates and doorways, beginnings and endings, change, transition and all that is double edged in life, unlocking the portals to whatever is termed ?culture?.

In the month of Janus, Cafe Gallery Projects London open their doors to the Bermondsey Artists’ Group (BAG) Biennale. This is the first in a series of exhibitions and events, featuring work proposed, selected, made and curated by members of the Bermondsey Artists’ Group. The exhibition consists of a multi-disciplinary selection of works responding to the patron of January.

Founded in 1984 by members of the Bermondsey Artists’ Group, Cafe Gallery Projects London is an artist-led initiative. It promotes a wide range of work, from internationally recognised artists to various creative practices beyond the gallery system. This exhibition provides a rare chance to see the talent of the membership behind the organisation.

Alive art programme consisting of performances by exhibitors and collaborations with invited artists will run as an integral part of the exhibition.

The pieces of Karin’s work that were shown in the exhibition were: two from the Bankside Power Station cycle: the detail shot featuring part of a gate which joins and separates an electric sub-station from Tate Modern. The second image was created from an interior shot (detail) of the roof of Bankside Power Station but makes architectural references to the windows of that building. The third picture shows the Canary Wharf IRA bombing plus advertising hoardings.

at The Space, Hubbub Bar
throughout November 2004

In the confined space of the upstairs bar Karin exhibits four works, all of which have been in major exhibitions both in London and Bristol. Of particular interest is a piece which records the result of bomb damage in Marsh Wall (Last shown at the Salon des Arts, Kensington, London). Three further ‘paintings’ have as their subject the last working spice mill in Butlers Wharf, a building which has now been converted into luxury flats.

As of last weekend, Karin has moved studio – the Trundle Street studios have now closed, so she has had to relocate from Borough to a new location in Rotherhithe. Douglas Schwab has posted some thoughts and a couple of pictures he took at the farewell party on his moblog:

(unfortunately, these links are now obsolete)

A picture of Karin’s was hung at The Salon des Arts, London, from November 11th to December 14th as part of an exhibition called Religion, Art and War. The exhibition will go to Jerusalem in February, where it will be on show at the The Artists House for three weeks, after which it will move to Haifa to the Arab/Jewish Centre for two weeks. With luck the exhibition will return to London so that those of you who did not catch it the first time round can go and see it.